Increased demand, attractive prospectivity, good regional data and new concepts have facilitated a boom in prospecting in the Nordic countries, leading to many new mining operations and the re-opening of old ones, especially in northernmost areas.

The prices of many base and noble metals have increased by factors of >3 in the last five years, driven by growth in China and India and by a worldwide drive to secure resources on a long-term basis. These trends have led to a prospecting boom, also in northern Europe, and are creating political interest in better documentation of mineral resources in Europe, which has a serious imbalance in its production of many mineral resources relative to consumption. The volume of prospecting activity in the Nordic countries rose as follows from 2006 to 2007: Norway: 137% increase to € 12 million, Sweden: 70% increase to € 74.5 million and Finland: 31.5% increase to € 50 million (RMG, 2007).

Ten years ago, metal production in the Nordic countries was dominated by three large Nordic companies, LKAB and Boliden in Sweden, and Outokumpu in Finland and Norway. Outokumpu withdrew from mining in the first years of this decade in order to focus on stainless steel.

The prospecting boom within recent years has seen the involvement of several major international mining houses as well as several smaller mining companies and numerous junior exploration companies, some with a Nordic base but also including companies based in Canada, Australia and elsewhere. This presentation will focus on new developments rather than the established major operations such as Kemi (Cr), Kiruna (Fe), Aitik (Cu) and Tellnes (Ti).

Systematic accumulation of regional geophysical and geochemical data and metallogenic studies by the Geological Survey of Finland (GTK) and follow-up prospecting by GTK and Outokumpu over many years has led to the discovery of numerous new deposits in Finland: focus has included Au, Ni-Cu-PGE and polymetallic deposits of various kinds.

The Talvivaara deposit contains 414 Mt of Ni-Cu-Co-Zn-bearing black shale (0.26% Ni, 0.54% Zn, 0.14% Cu, 0.02% Co) in the Palaeoproterozoic Kainu Schist Belt in Sotkamo in central Finland: the deposit was discovered and thoroughly documented by GTK in the 1970s and early 1980s: it is the largest known sulphide Ni deposit in Europe and is considered to be a world-class polymetallic deposit. The deposit will be mined in two open pits, with beneficiation by bacterial leaching: production commenced in April, 2008, and is expected to continue for > 25 years, with employment for 500 persons.

The Keivitsä deposit is another large low-grade Ni deposit, in this case in a Palaeoproterozoic layered intrusion 140 km north of Rovaniemi in Central Lapland. It was also discovered by GTK, in 1987, and studied in detail, first by GTK and later by several companies: resources of > 400 Mt containing 0.29% Ni, 0.45% Cu and 0.4 g/t noble metals have been documented. The Canadian company, Scandinavian Minerals, is in an advanced stage of feasibility studies and is aiming to commence production from an open-pit mine early in 2010.

The largest gold deposit in Northern Europe, Suurikuusikko, is an orogenic gold deposit hosted by albitised, mafic to intermediate volcanic rock in Kittilä in the Central Lapland greenstone belt (GEO 08/2003): it was discovered by GTK in the 1980s during a long-term regional gold exploration programme (www.gtk.fi, Ojala, 2007): the deposit has reserves of >18 Mt grading >5 g/t and is being developed by the Canadian company, Agnico-Eagle, which aims to commence production in September 2008.

Two new small mines are already in production – the Kutemajärvi Au mine (Dragon Mining) and the Särkiniemi Ni mine, near Hitura (Belvedere Resources) and several others are at advanced stages of development/assessment: these include Kylilahti (Cu-Ni-Co-Au-Zn), near Outokumpu and the Suhanko PGE-Ni-Cu deposit, northeast of Kemi.

Numerous kimberlites, several of them diamond-bearing, have been found in Finland and four companies are currently active in diamond exploration in eastern Finland: economic deposits have yet to be found.

Sweden has the oldest mining culture of the Nordic countries and is the largest metal producer, with 9 active mines. Over thirty exploration/-development projects are in progress, with a strong geographical focus in the  Skellefte area, but with several projects in northernmost Sweden, in the Caledonides and in the Bergslagen area.

Draqon Mining, an Australian company, brought the Svartliden Au mine, west of the  Skellefte area, into production in 2005. The deposit is associated with shear zones in a greenstone belt, and contains 2.5 Mt with >4.5 g/t Au. Svartliden is one of the deposits in a recently defined Proterozoic orogenic-gold province, the Gold Line. The province includes 11 deposits in a NNW-SSE-trending zone extending from Sorsele to the Gulf of Bothnia. The Blaiken mine, in the same belt, has its basis in two deposits with a combined reserve of >9 Mt of Cu-Pb-Zn ore: production has currently been suspended: the mine is operated by Lapland Goldminers, which has recently completed a feasibility study for mining the Fäboliden deposit, the largest found so far in the Gold Line: Fäboliden contains > 60 Mt grading > 2g/t and can initially be mined in an open pit.

Iron oxide-copper-gold (IOCG) mineralizations are the focus of several major projects in northern Sweden and Finland. Northland Resources is investigating two such deposits in Sweden, Stora Sahavara and Salmivaara, both close to the Finnish border. They are dominated by magnetite and occur within the Pajala Shear Zone and were discovered by the Geological Survey of Sweden (SGU) in the 1960s: Stora Sahavara contains measured and indicated reserves of 122 Mt, grading >43% Fe and is the topic of a scoping study.

Other provinces which are the particular focus of exploration in Sweden include the polymetallic ores in the  Skellefte province and uranium mineralizations in shales along the Caledonian front.

The mining districts of Kongsberg (Ag), Røros (Cu) and Løkken (Cu) represent a metal-mining tradition in Norway extending back to the 17th Century. Norway’s mineral production is currently dominated by industrial minerals, especially calcium carbonate, but the country has one world-class ilmenite mine, Tellnes, in the Rogaland anorthosite province in SW Norway.

Focus on other mineral resources has drawn attention from metal exploration in Norway but several important discoveries have been made in recent decades. One of the largest is the Engebøfjellet eclogite-hosted rutile deposit, a new type of deposit, discovered originally by Elkem,and investigated by DuPont-Conoco in cooperation with NGU, in the 1990s. The deposit contains a resource of >300 Mt with 3-4% rutile: it is currently being assessed by Nordic Mining with a view to a decision on mining in 2009.

Several companies are active in Au exploration in Norway, including at least ten projects spread from the extreme south to the Russian border. Pilot production was carried out in 2007 at the Kolsvik deposit in the Bindal granite, north of Trondheim, by the Swedish company, Gexco: the deposit is thought to contain c. 2 Mt with grades of 4-7 g/t. A further «virgin» deposit is the Raitevarre (IO)CG deposit in Finnmark in northern Norway, a large low-grade mineralization, currently the subject of geophysical and geological studies by Store Norske Gull.

Norway has a history of copper and molybdenum mining and exploration. Previously unmined deposits being investigated include the Nussir Cu deposit in Finnmark (Nussir AS, GEO 03/2008)) and the largest porphyry Mo deposit in Europe, Nordli in the Oslo Rift (Intex Resources).

Much attention has recently been devoted to the potential for Th in Norway, motivated by its potential as a fuel for a new generation of nuclear reactors and by a USGS assessment indicating that Norway has major resources of Th, especially in the Fen carbonatite, which also contains significant resources of Nb and REE. The Th-bearing minerals in Fen are, however, extremely fine-grained and present a major challenge in mineral dressing.

Many projects, especially in Norway, involve additional exploration, in many cases using new geophysical methods, in mining areas which have been exploited in the past. This is the case for many of the Blackstone Ventures Ni-Cu projects, e.g. at Lainijaur and Lappvattnet in Sweden, and Espedalen and Ertelien in Norway, several of which have yielded promising results.

IGE Nordic has documented 10 Mt of ore at the Caledonian Stekenjokk VMS Cu-Zn deposit in Sweden, with a view to an operation which could also include remaining ore at the Joma deposit, just across the border in Norway as part of its basis: the company is also developing the Proterozoic Bidjovagge Cu-Au deposit in Finnmark, which has been mined for two periods in the past. The Mofjellet area is being explored by Gexco, which has documented resources of 3 Mt of Cu-Zn-Pb (-Ag-Au) ore, grading 2.4% Zn, with an additional resource of up to 6 Mt at the nearby Sølvberget deposit, both of which are stratabound deposits in the Caledonian nappe sequence.

The Archaean banded iron ore deposits at Bjørnevatn, south of Kirkenes, were discovered in 1866 by Tellef Dahl, the second geologist appointed to NGU after its founding in 1858: the mine was operated from 1908-1996, with a cumulative production of 200 Mt. Inferred resources at the four main deposits are given as 373 Mt grading 31% Fe. A further 19 magnetite deposits occur within a strike length of 12 km (www.northerniron.com.au). Production is planned to commence in 2009, with a volume of 7 Mt/a for 19 years and the potential for doubling the production.

Many companies consider that the Nordic countries are still under-prospected in relation to metallogenic belts in other parts of the globe, as is clearly indicated by the activity of companies based outside the region. There are good reasons for believing that the Nordic «treasure chest» will reveal new riches for many years to come!

Acknowledgements: Many sources have been used in this compilation, not least Lahtinen, R., Mitrofanov, F. and Weihed, P. (2008 – presentation at FEM, available at:

The Fennoscandian Ore Deposit Database (FODD) is a comprehensive, public-domain database containing data on more than 1000 metal mines and unexploited deposits within Norway, Sweden, Finland and NW Russia, compiled by the geological surveys of these countries. The database was first published at the Fennoscandian Exploration and Mining (FEM) meeting in November 2007. A printed ore deposit map based on the FODD was published in March 2008 and work on a metallogenetic map is in progress. A wealth of information about the Nordic «treasure chest» as shown by FODD can be accessed through the web-based map service at http://geomaps2.gtk.fi/website/fodd/viewer.htm 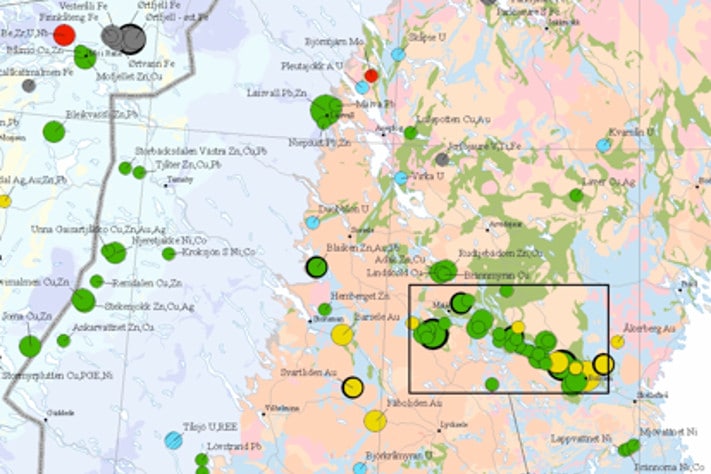 A part of the printed Ore Deposit Map based on the FODD. The area extends from the Skellefte province in the southeast, includes three of the deposits in the Gold Line and includes the Mofjellet deposit near Mo I Rana in Norway. Symbol sizes indicate in-situ value.