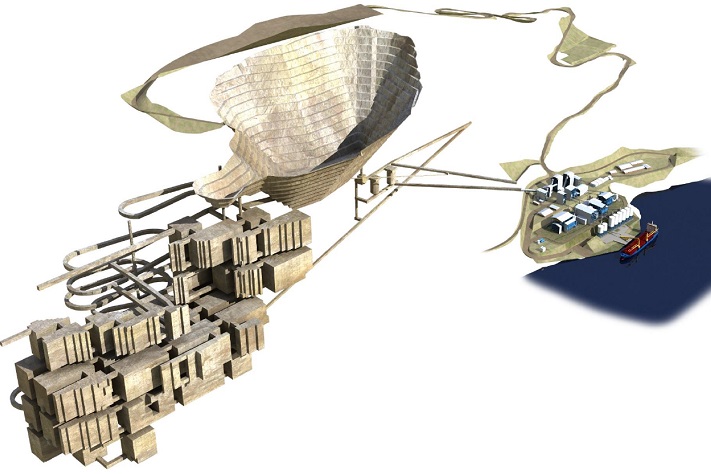 The estimated mineral resources have increased by around 5%, to approximately 98 million tonnes, Nordic Mining writes in a press release.

As a result of the limited drilling program at Engebø in January/February 2018, the estimated mineral resources in the measured and indicated categories have increased by around 5%, to approximately 98 million tonnes, based on a cut-off of 3% TiO2. The average grade of rutile and garnet is 3.87% and 44.4%, respectively. The main purpose of the drilling program was geotechnical investigation within the open pit area, and in this respect the campaign has provided valuable information for the mine planning.
Main results

In January/February 2018, a limited drilling program of around 1,580 meters was carried out at Engebø. Information from the drilling program has been used to update the resource model of the deposit. The total estimated resources in the measured and indicated categories have increased to approximately 98 million tonnes at a cut-off of 3% TiO2. This is an increase of 5 million tonnes compared with the 2016 estimates. Of these tonnes, 22.3 million tonnes are in the measured category, up 7.3 million tonnes (+49%) from the previous estimate. The average rutile and garnet grades are 3.87% and 44.4%, respectively. The average TiO2 grade is similar to the 2016 estimate. The garnet grade is slightly elevated compared with the previous estimate.
The geotechnical investigation has confirmed the Engebø eclogite deposit to contain a competent lithology ideal for mining at a high recovery.
The estimated resources in the inferred category represents an upside potential which will be evaluated in the further project development.
The table below summarises the 2018 resource estimations compared to the 2016 figures. The TiO2 grades in the table represent total contained TiO2.

The increase in the classified resources is mainly in the central and southern part of the pit area where the grades of TiO2 and garnet are highest within the open pit.
The resource estimations have been carried out by the independent Competent Person, Mr. Adam Wheeler. A technical report will be produced as a basis for the ongoing definitive feasibility study. The technical information in this stock market release has been approved by Mr. Wheeler.
Comments from management
CEO Ivar S. Fossum comments: “The drilling program has provided positive geotechnical information which will enable us to move on with the optimising of the mine planning. In addition, the increased mineral resources may extend the mine life of the project.”

Drilling program and analytical methods
The aim of the 2018 drilling program was primarily geotechnical investigations. 4 drill holes at a total of 830 meters was drilled intersecting the future pit slope after recommendations from the international consultancy company SRK. These drillholes were logged and surveyed by SRK. Acoustic and optical surveying was done on these drillholes in addition to 3 drillholes from the 2016 campaign. 6 drillholes on a total of 750 meters were drilled with the aim to upgrade ore in the open pit area from inferred to measured and indicated categories.
The drilling was carried out by the Norwegian drilling company Arctic Drilling AS between 20 January and 15 February 2018. After the 2018 drilling campaign, the data in the resource model and the revised resource estimates is based on approximately 23,000 meters of drill core from a total of 3 drilling campaigns (1996/1997, 2016 and 2018).
The 2018 drilling campaign included recovery of 1,581 meters of drill cores. The cores were logged and sampled at the company’s core storage facility in Naustdal. 367 whole rock chemical analyses (XRF) rutile specific analyses (ME-ICP41) were carried out by ALS Minerals in Sweden. A total of 180 samples analysed both by QEMSCAN (Scanning electron microscope analysis) and XRF have successfully been used for correlation between bulk rock chemistry and garnet grade in deposit.
Previously the eclogite has been subdivided into ferro, leuco and transitional eclogite. In the current drilling campaign, a further subdivision of these rock types has been done to better understand the textural and mineralogical variations in the deposit.
Resource potential at lower cut-off grade
By decreasing the cut-off grade applied in the resource estimate, an increased tonnage of eclogite ore will become available. The table below shows the 2% TiO2 cut-off tonnages for the 2018 and 2016 resource estimates. The TiO2 grades in the table represent total contained TiO2.