The Sichuan earthquake must be understood with reference to deformation in Tibet as a result of the convergence between the Indian and the Eurasian Plates.

A destructive earthquake struck on May 12, 2008 at 06:28 (UTC/GMT) northwestern Sichuan Province of China. Strong ground shaking caused by the earthquake resulted in more than 67,000 casualties with additional 20,000 missing and approximately 300,000 injured.

The Wenchuan earthquake was the most destructive earthquake in China since the deadly Tangshan earthquake of 1976. The death toll could have increased even more if the rupture propagation direction coincided with the location of the Chengdu. Fortunately, the largest city in the Sichuan Province with more than 3.5 million inhabitants have escaped the strongest shaking due to the fact that rupture initiated in the southernmost part of the fault and propagated northeastwards away from Chengdu. Accordingly the largest damage was observed on the population centers located along the northeasterly direction.

The earthquake was registered in almost all seismic networks around the world including the Norwegian National Seismic Network (NNSN – www.skjelv.no) operated by the Department of Earth Science, University of Bergen. 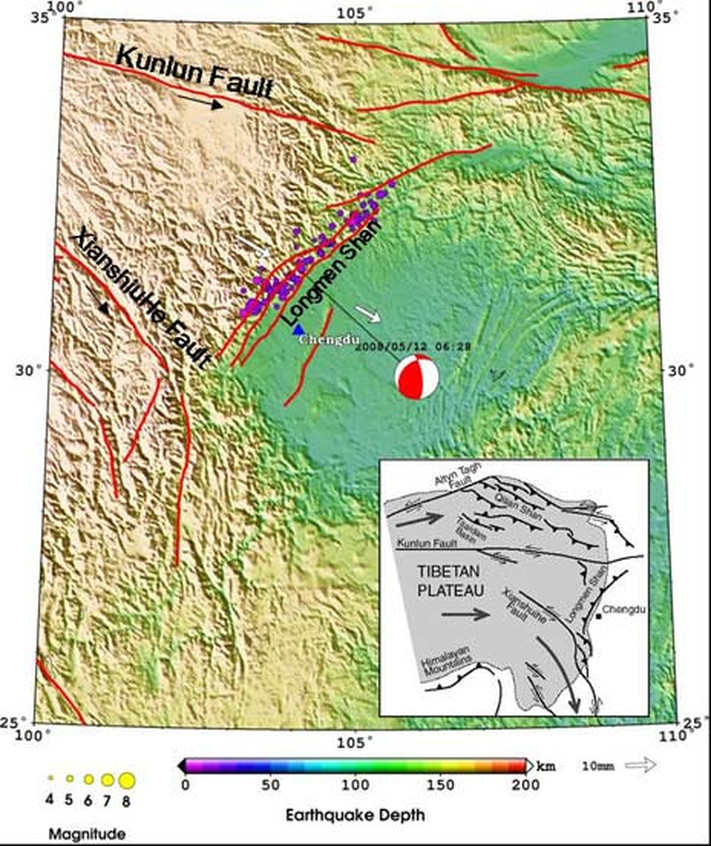 The main tectonic elements in the Sichuan Province (faults are shown in red). The white arrows indicate the approximate GPS velocity vectors where the motion is slowed down across the Longmen Shan Fold and Thrust Belt from 14 mm/yr in the eastern Tibet down to 10 mm/yr in Sichuan Basin. Part of the accumulated stress (4 mm/yr) is released during the earthquake. The purple-blue colored circles show the epicenter location of the aftershocks (from USGS). The main shock is shown by the largest symbol. Focal mechanism indicates reverse faulting along a NE-SW oriented NW dipping fault plane (from GCMT). The inset map shows the main tectonic elements of deformation in eastern Tibet.

The earthquake had its epicenter along the Longmen Shan Fold and Thrust Belt (FTB), which separates the Longmen Shan Mountains of the Tibetan Plateau in the northwest from the Sichuan Basin in the southeast. No previous earthquakes of this size have been recorded along this structure apart from a magnitude 6.2 earthquake in 1970 in the southwestern part. The occurrence of a magnitude 7.9 earthquake along a thrust fault with negligible seismic activity warrants a special attention on the effects of long-term deformation and the underlying tectonic processes on present day seismicity and hence in the assessment of the earthquake hazard in this area.

The north-northeasterly motion of the Indian plate with a velocity of about 4cm/yr and its collision with the Eurasian plate across Himalayas results in expansion and clockwise rotation of the Tibet mainly accommodated by large transcurrent systems – i.e. left-lateral strike-slip faults such as the Altin Tagh, Haiyuan and its estern extension Qinling, Kunlun, XianshiuHe-XiaaJian and the Red River faults.

The westernmost boundary of the Indian plate is marked by the left-lateral strike-slip Chaman Fault zone in Pakistan whereas the easternmost boundary corresponds to the N-S lying transcurrent systems in Burma. In addition to the deformation along these major transcurrent systems the collision of the Indian plate results in wide-spread deformation along the entire Tibetan Plateau. Whereas most of the deformation is accommodated along the Himalayan thrust belt, extensive deformation takes place within the Eurasian plate which is manifested by the existence of the high topography in Tibet.

Deformation history of this region goes back to the Mesozoic Indosinian orogeny. During Late Triassic to Early Jurassic, a sequence of continental margin sediments and flysch were highly deformed and thrust eastward onto the rocks of the Yangtze craton while Sichuan basin was accumulating clastic sediments in a foredeep basin.

South China block (Yangtze craton) converges to the Phillipine Sea plate in the east with the associated subduction along Taiwan. In the west it is bounded by the Longmen Shan FTB which is the result of the deformation of the Tibetan plateau due to its east-southeasterly motion. This motion is slowed down across the Longmen Shan FTB from 14 mm/yr in the Tibetan Plateau down to 10 mm/yr in the Sichuan basin. This differential motion accumulates compressional stresses at a rate of ca. 4 mm/yr in the area. The earthquake of 12 May 2008 is a manifestation of this motion which resulted in on the average 4-5m of reverse displacement along a 250km long rupture with down-dip extension of ca. 20 km. The maximum slip reached 9m. The fault plane solution indicates a low angle (33o) thrust fault dipping northwest with a strike oriented in the northeast-southwest direction. The minor right-lateral component indicates that the fault lies slightly oblique to the maximum compression axis.

Recent seismic tomography studies reveal an important anomaly across the Longmen Shan FTB where the crustal thickness is reduced significantly from a 65km weak crust in eastern Tibet down to approximately 35km strong crust underneath Sichuan basin. This major change in the strength and the thickness of the crust gives rise to the development of localized deformation of the Tibetan plateau where the counteracting plate forces along the Philippine Sea subduction zone retards the southeasterly motion of the South China block. Longmen Shan FTB represents therefore the eastern termination of the actively deforming Tibetan Plateau. As such the Longmen Shan FTB also marks the termination and arrest of two major strike slip fault zones, the Kunlun fault in the north and the XianshuiHe-XiaaJian fault in the south.

The earthquake of 12 May 2008 was an example of a rare but disastrous earthquake that may occur along many other similar structures in the region. The long recurrence interval for such earthquakes (in the range of 1000 years or more) makes it difficult to identify their true earthquake hazard potential based on statistical analysis of instrumental and historical seismicity. Special attention is needed through geological and paleoseismological studies to address this major problem not only in China but also in many other regions with similar tectonic conditions. Large areas in Europe across the frontal end of the actively deforming Alpine belt represent just another example of this. 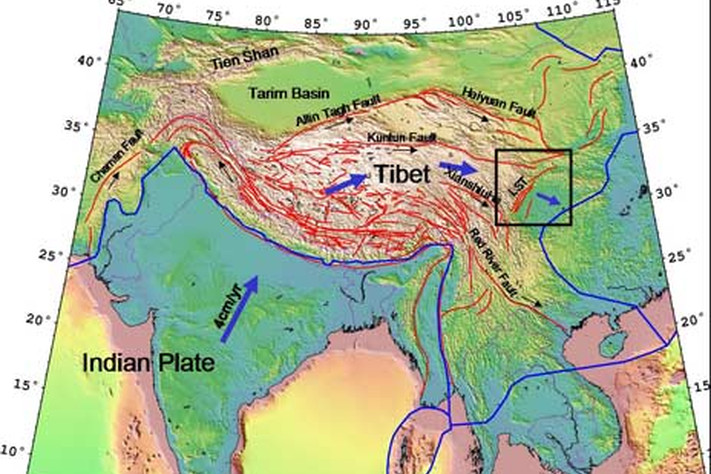 Deformation in Tibet as a result of the convergence between the Indian and the Eurasian Plates. The major plate boundaries are shown in blue lines. The plate velocity for the Indian plate is shown as a blue arrow (approximately 4 cm/yr). The major faults are shown in red. The Sichuan Province where the Wenchuan earthquake of 12 May 2008 (M=7.9) occurred, is shown as a black rectangle. The earthquake ruptured a reverse fault along the Longmen Shan Fold and Thrust Belt (LST).