The fascinating Snowball Earth theory has been the subject of great controversy in the geoscientific community for some 15 years. Professor Paul Hoffman, a specialist in Proterozoic Earth history and an early proponent of the theory, gives his state of the art account.

One of the most extreme climate changes in Earth history occurred 635 million years ago, when the younger of two Cryogenian pan-glacial episodes ended. This gave rise to a sweltering transient aftermath due to the buildup of atmospheric greenhouse gases during the prolonged (20 Myr) global freeze. High concentrations of carbon dioxide are inferred from boron isotopes, mass-independent oxygen isotope fractionations, and temperature-dependent carbon isotope variations in «cap» dolostones, distinctive blankets precipitated globally during the rise in sea levels fed by the melting ice-sheets. Locally, there is isotopic evidence for methane release, which would also have contributed to ice-sheet meltdown.

Of the 22 continents and microcontinents in existence during the Cryogenian (the Period preceding the Ediacaran, which leads into the Cambrian), older glacigenic deposits are known from 13 and younger deposits from 14. The older deposits have been directly dated (713 Ma) only in Oman, and the younger ones (635 Ma) only in Namibia and South China. But the case for global glaciation does not rest on correlation, but on the occurrence of glacigenic deposits at sea level close to the paleoequator (compare maps).

Paleomagnetic poles from younger Cryogeni and glaciomarine deposits in South Australia have shallow inclinations and pass soft-sediment-fold and reversals tests. Similar deposits of older Cryogenian age in the Canadian Cordillera formed close to the paleoequator based on robust paleomagnetic data from mafic lavas, dykes and sills dated at 723 and 780 Ma. If the warmest areas were glaciated at sea level, colder areas must have been frozen as well.

The alternative hypothesis that the tropics were colder than the poles, due to a large orbital obliquity, is falsified by Proterozoic paleomagnetic data showing that thick carbonate-dominated successions are limited to low paleolatitudes and evaporites to the subtropics. 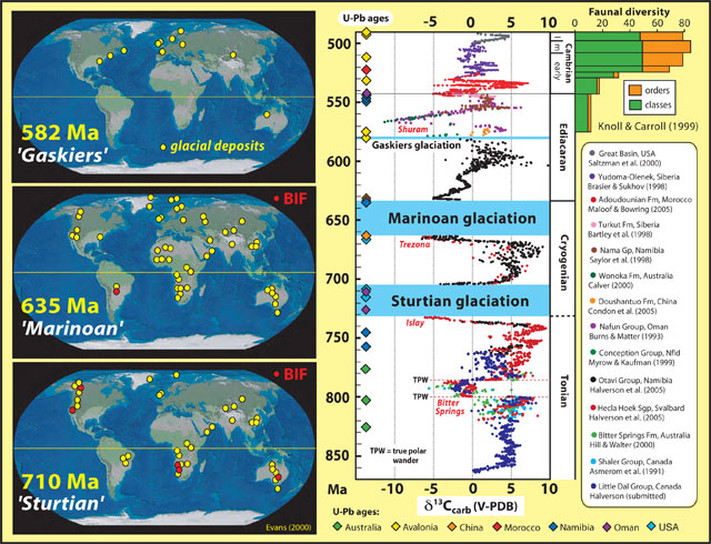 Present global distribution of Sturtian, Marinoan and Ediacaran glacial and glacial-marine deposits (left), and secular variation in the carbon isotopic composition (δ13C) of marine carbonates (right) from 860 to 490 Ma (modified after Halverson et al., 2005) and their relation to the three glacial epochs and early faunal diversification (after Knoll and Carroll, 1999).

It has recently been shown that sea-level was drawn down more than ~0.5 km below the shelf-edge during the younger Cryogenian glaciation in Namibia. When isostatic adjustments and direct gravitational effects of the transfer of water loads from the ocean to continental ice sheets are taken into account, a glacioeustatic fall of ~1.5 km is inferred, implying an average ice-sheet thickness of ~3 km for all continents. This is consistent with climate model predictions for icesheet buildup over 100s of kyrs fed by sea-ice sublimation in a world with frozen oceans.

The inferred glacioeustatic fall does not discriminate between ice-covered continents with frozen oceans («snowball» state) and ice-covered continents with limited sea-ice («slushball» state). The former is arguably more compatible with synglacial iron-formations and with the evidence from «cap» carbonates, but the latter is arguably more consistent with the survival of different extant clades of euykaryotic algae, known to have first evolved in pre-Cryogenian times.

There being no direct evidence on the state of subducted oceans, resolution of the snowball versus slushball debate is unlikely in the foreseeable future, given the emotional stakes involved on both sides.

Until recently, it was believed that the oldest fossils arguably attributed to multicellular animals were the enigmatic, soft-bodied, frondose macrofossils that evolved in the wake of the mid-Ediacaran (582 Ma) Gaskiers glaciation in Newfoundland (possibly correlative with the Moelv and Smalfjord glaciations of southern and northern Norway, respectively). Although extensive, this glaciation was apparently regional, not global, in scale.

In 2007, it was reported that an acritarch (acid-resistant, organic-walled microfossils of unknown affinity) species with regularly-spaced processes (Tianzhushania spinosa) that occurs abundantly in South China in middle and lower Ediacaran strata represents cysts of diapause eggs and embryos of unspecified multicellular animals. The oldest fossils of this species are found close to a tuff layer dated at 632 Ma, just a few meters and 3 Myr younger than the stratigraphically underlying «cap» dolostone. Consistent with this discovery, molecular fossils (biomarkers) diagnostic of sponges have been reported from strata down to and even within glacigenic deposits of late Cryogenian age in the subsurface of the South Oman Salt Basin.

These findings suggest that multicellular animals survived or evolved during the younger Cryogenian glaciation. Whether one believes that biological considerations place limits on the severity of Cryogenian ice ages, or that their severity was ultimately responsible for advent of multicellularity in animals, the new findings are tantalizing. 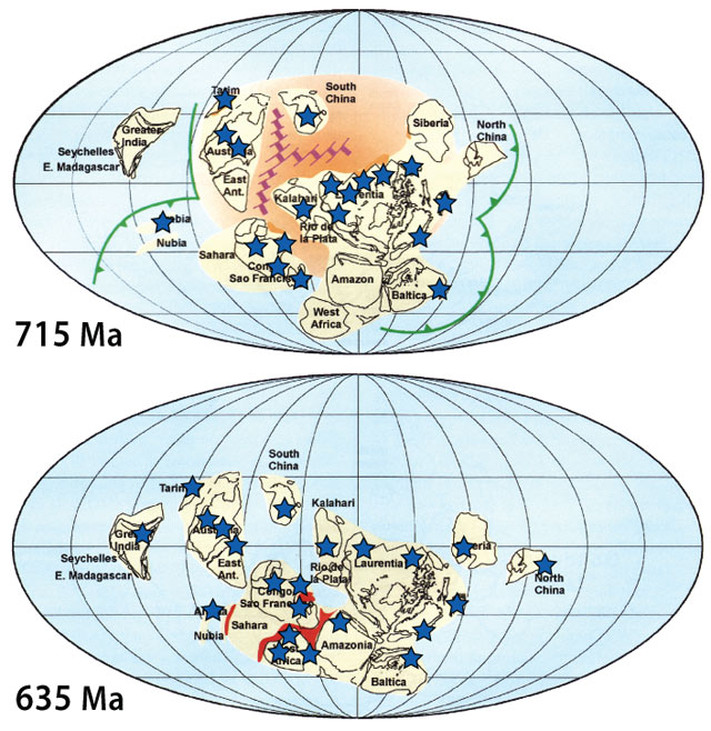 The possibility that the Earth could become totally ice-covered (due to ice-albedo feedback) emerged from radiative energy-balance calculations in the late 1960’s. The realization that such a «white earth» disaster was self-reversing (and therefore geologically possible) came with the suggestion in 1981 by planetary scientists led by James C.G. Walker that silicate-weathering feedback in the geochemical cycling of carbon acts as a geothermostat. The term «Snowball Earth» was invented by paleomagnetist Joe Kirschvink, who first proposed in 1992 its actual occurrence in the Neoproterozoic geological record. This was based on indisputable evidence for equatorial glaciation at sea level. He also suggested ways the theory could be tested geologically. Neglect of Kirschvink’s proposal ended in 1968 with its outspoken advocacy by Hoffman and his colleague, the paleoceanographer Dan Schrag. The theory remains highly controversial and meets stiff resistance from glacial sedimentologists and paleontologists in particular. The theory’s death has been repeatedly announced, but it lives on because of its ability to explain many extraordinary features of the Proterozoic stratigraphic record.

An even older glaciation

More perplexing than the Cryogenian glaciations themselves is the 1.5 billion-year ice-age gap separating them from Paleoproterozoic glacigenic deposits dated between 2.22 and 2.45 Ga. It is a safe bet that when the significance of this gap is understood, causation of the pan-glacial episodes that frame it will be revealed.

The Makganyene glaciation in South Africa occurred near the end of the older period and paleomagnetic data from associated lavas support a lowlatitude glacial environment. The ice age ended with deposition of iron-formation and the largest sedimentary manganese deposit on record, unequivocally signalling the presence atmospheric free oxygen, or of a strong oxidant like hydrogen peroxide, which could have been generated on and buried in glacial ice subjected to direct ultraviolet radiation in the absence of an ozone screen.

A provocative suggestion is that the Makganyene glaciation was caused by the rapid destruction of redox-sensitive greenhouse gases consequent to the evolution of oxygenic photosynthesis. At least low levels of free oxygen (>10-6 PAL) appeared earlier, however, based on the elimination of large mass-independent sulfur isotope fractionations in sedimentary pyrites soon after 2.45 Ga, near the time of the first of three glacigenic formations in the Huronian succession of North America. These in turn post-date the occurrence of sterane biomarkers in 2.7-Ga strata arguably diagnostic of oxygenic photosynthesis and eukaryotic cellular organization. This biomarker evidence remains controversial, however, because of uncertainties regarding their phylogenetic significance and the potential for contamination of core samples obtained by commercial drilling.

Linking climate to other events

Despite uncertainty and controversy, the picture that is emerging links the most extreme climate events in Earth history with disturbances of the carbon cycle, the stepwise rise of oxygen, and irreversible changes in the evolution of life. 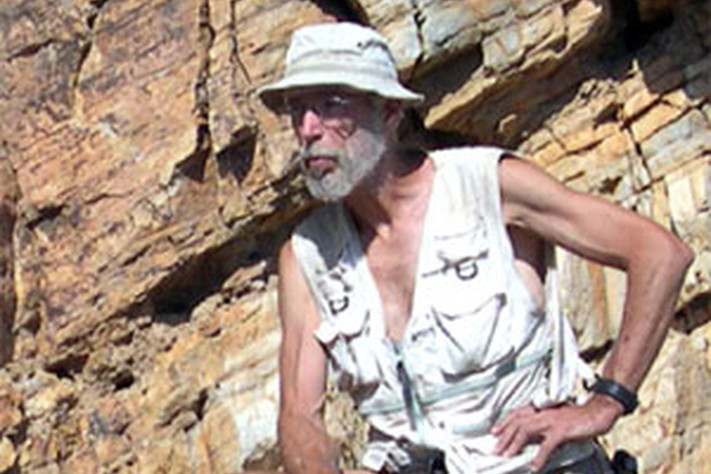 Dr. Paul Hoffman is Sturgis Hooper Professor of geology in the Department of Earth and Planetary Sciences at Harvard University, Cambridge, MA (USA). Professor Hoffman was an early advocate of Proterozoic plate tectonics, for which he was formerly criticized as a «doctrinaire uniformitarianist». This criticism abruptly ended when he took up the case for Snowball Earth.. His snowball earth related studies originated in northern Namibia, where he has worked annually since 1993. Paul Hoffman’s involvement in the development of the theory is featured elegantly in Garbielle Walker’s “Snowball Earth: The Story of a Maverick Scientist and His Theory of the Global Catastrophe That Spawned Life As We Know It”. The book is non-technical and highly recommended. 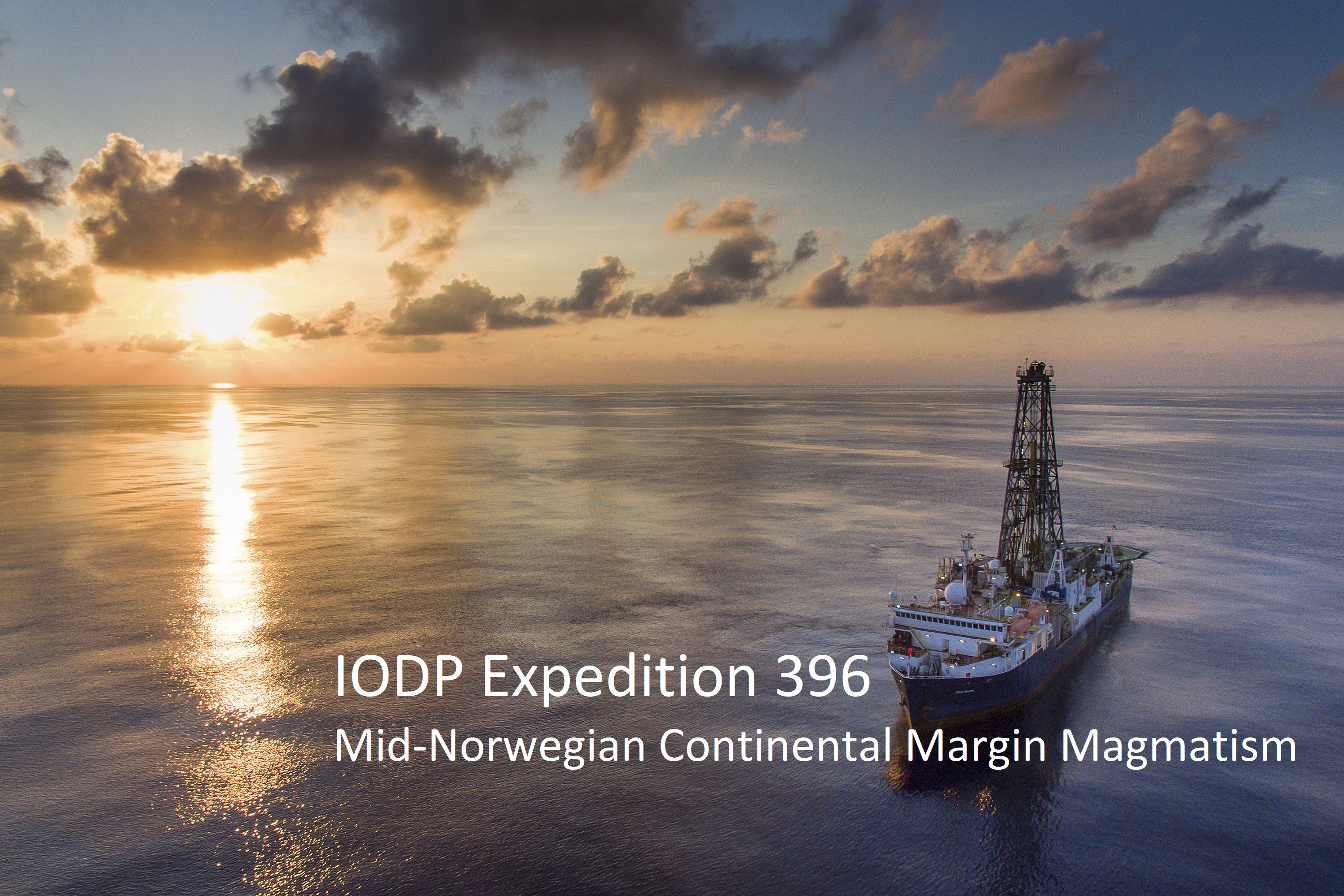