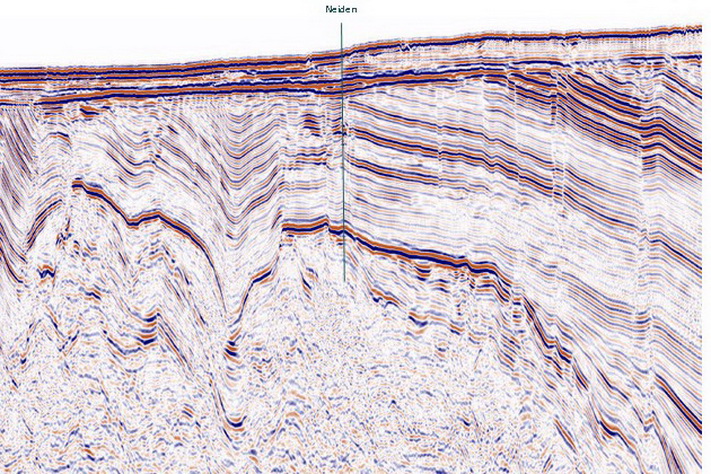 Tie line (NW-SE) through the Neiden prospect on the Loppa High. Well 7220/6-2 drilled through Triassic shales and sands (dipping reflectors) before it entered the Paleozoic carbonates below the strong reflector. Illustration: The line is generously provided by MultiClient Geophysical from their Barents Well Tie survey (BWT).

Lundin Norway spudded the Neiden prospect three weeks ago. Being drilled updip from the Obelix oil disocvery, there is a high chance of success.

Well 7220/6-2 – Neiden – was spudded October 2nd. The planned total depth is approximately 1,350 metres, and Lundin Norway expects to use 40 days for the drilling.Meaning that it is closing up on the Triassic targets.
The purpose of the well is to test reservoir properties and hydrocarbon potential in both the Upper Triassic silisiclastics, Carboniferous-Permian carbonates as well as Caledonian deformed metamorphic rocks.
– The Obelix structure with approximately 470m of oil column, was filled to spillpoint. The spillpoint was towards north meaning that Obelix spilled into the updip Neiden prospect. There is a very good chance of finding oil, says Geir Elvebakk, as the onlapping Lower and Middle Triassic source rocks of the Steinkobbe Formation is oil prone.Elvebakk has more than 30 years of experience working in the Barents Sea and is quite optimistic on behalf of Lundin.
– The main risk is seal, Elvebakk claims.
He believes in both source and reservoir, and according to him, there is a huge kitchen downdip on the Loppa High. The well is drilled in a location where good reservoir properties can be expected, particularly in the warm-water carbonates of the Gipsdalen Group. The Obelix well that was drilled – by purpose – away from potential permeable carbonate reservoirs. At such shallow burial depth it had a high risk for penetrating karstified carbonate reservoirs with open cavernous porosity systems and consequently a high risk for drilling hazards. The shallow burial of the Neiden Prospect means risk for biodegraded oil and leakage along the large masterfault towards the west.
Lundin estimates the Neiden prospect to have the potential to contain unrisked, gross prospective resources of 204 million barrels of oil equivalents, which could have an important impact on the area development and overall infrastructure in the Barents Sea.
It is on the same trend as Alta/Gohta discoveries, and it has a relatively high chance of success (30%) compared to other Lundin wells.

Do you believe in an oil discovery? Or do you think it will be a dry well?
Place your bet in Geonova’s WellBet

In todays Hydrocarbon Habitats seminar in Oslo, Hans Chr. Rønnevik of Lundin Norway will give a talk entitled: Fact based knowledge by mastering an expanding toolbox.