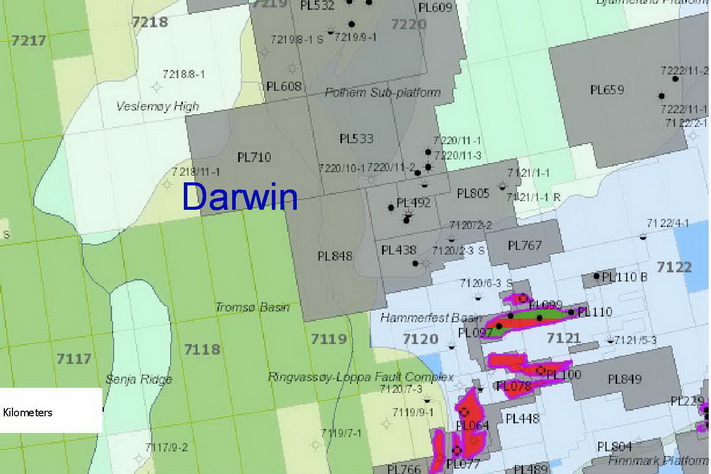 «Charles Darwin is well known for the statement ‘survival of the fittest’. ‘Survival of the fittest’ may mean that those still curious, willing to learn and adjust to changing information and conditions will do well», says Geir Lunde, CEO of Concdedo.
The compnay has selected some learning points after drilling the Darwin prospect on the Veslemøøy High in the Barents Sea. These are learning points that should be relevant when evaluating open acreage in the upcoming APA 2016. Lunde will go into detail about this in the Hydrocarbon Habitat seminars in Oslo April 5 and Stavanger April 7.
See the programme.
«In our initial interpretation leading up to the 20. Concession Round application in 2008 we saw the potential for a shallow Jurassic sequence within the Veslemøy High as a high potential/high risk opportunity,» Lunde says.
With new data, however, especially the reprocessed TGS long cable data, it became more obvious that the Darwin well, 7218/11-1, would reach TD in Cretaceous rocks.
«When the Darwin well was drilled in 2013 the targets were potential sandstones of Paleocene and Cretaceous age,» Lunde explains.
The well was dry, but the geological knowledge about the Veslemøy High increased substantially. One of hte interesting facts is that the well proved about 130m of Turonian source rock that, however, was immature for hydrocarbon generation.
Nevertheless, the main remaining potential within the PL 531 area is in Concedos opinion a large Jurassic structure.
«Correct seismic tie of ‘Top Reservoir’, depth conversion, estimation of removed overburden and reservoir quality are important challenges,» Geir Lunde says.
For more learnings, please join us in April.