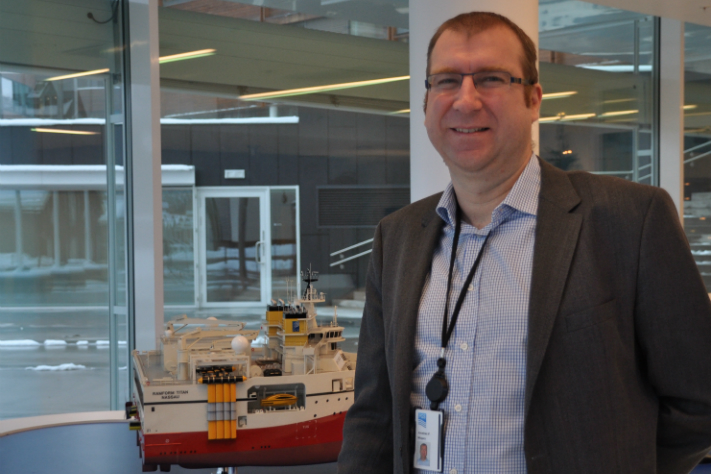 "This is the place to be," says Jonathan Midgley, referring to the collection of EM simultaneously with seismic. Photo: Halfdan Carstens

Multi-Geophysics» is the future. After PGS began collecting EM simultaneously with seismic, we have made another small step towards this vision.

Collection and processing of EM data (electromagnetic data) for the oil industry has for a long time been dominated by one operator. But now PGS is on its way to become a serious competitor. After a cautious start in 2012, PGS collected commercial EM data last year, and this year the company will collect even more data ahead of the 23rd round.

– EM fits into PGS’s strategy. We have extensive experience in handling and towing cables, and the data can be collected at the same time that we collect seismic, says Jonathan Midgley, responsible for EM Business Development at PGS. 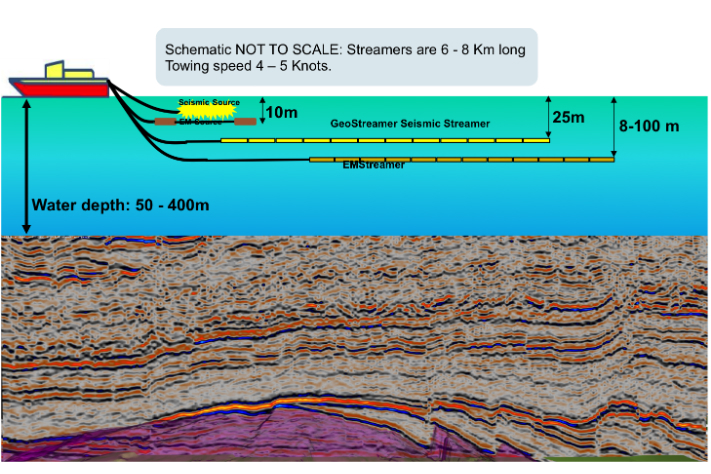 Schematic diagram for acquisition of seismic and EM on the same boat. The 6.8 km long EM cables towed at about 100 meters, while the source is approximately 10 meters below the surface.
Illustration: PGS

– We have placed receivers in cables hanging behind the boat. The point is that we do not a separate vessel to do it, the gathering of data can therefore be made more cost-effective compared with competitors who place nodes on the seafloor.

«Technology driven exploration»
PGS will give an update on technology and present data on the forthcoming half-day seminars in Oslo (October 21) and Stavanger (November 5).
www.hydrocarbonhabitats.no

– The limitation so far is that data can only be collected in water depths less than 4-500 meters. But we have plans to collect EM data in deeper water in the future.

– Therefore, I imagine that we are a serious competitor to EMGS. But even if EM in PGS is good for the industry, it is also good for EMGS, as competition is needed before the EM market will grow, says Midgley. 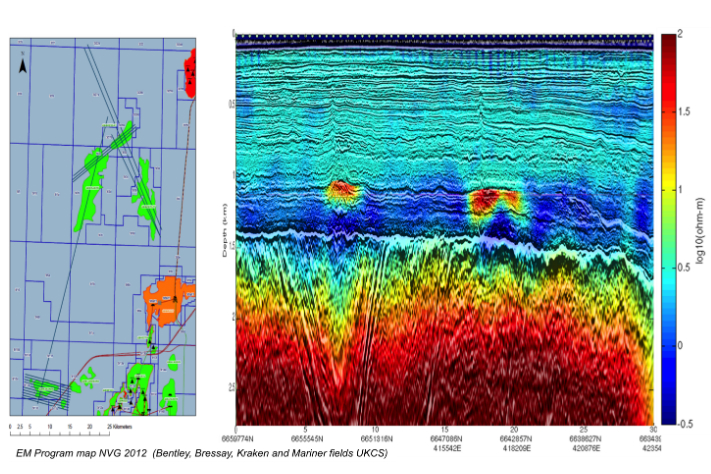 EM and seismic over two oil fields in the UK sector of the North Sea. The fields are clearly indicated. So does the crystalline basement rocks.
Illustration: PGS

Midgley was also involved when PGS introduced the GeoStreamer a few years ago. From experience he therefore knows that it takes time to implement new technology. But when data examples from the GeoStreamer were introduced to the market, skepticism disappeared. A similar scenario is likely for towed EM.

– It has already been shown that the EM technology works when the receivers are on the seabed. We expect, however, that we must overcome the skepticism concerning towed EM data.

– We must therefore demonstrate that we are able to collect good data with this method, which we have done, he points out.

One of the advantages of towed EM is that the data density improves. That means a higher signal to noise ratio. Another advantage of having the receivers in the water is that it reduces the effect of anomalies near the seabed. Signals cables are less affected by local variations in the seabed. It is «cleaner» data, PGS geophysicists believe.

Last year PGS collected 3500 km of EM data in the Fastnet Basin south of Ireland. It was an “add on” to an equally large regional 2D seismic survey. The combined operation did not slow down the operations. In the Barents Sea PGS collected a few lines. Midgley believes that these clearly show that the PGS technology has a bright future ahead. Last year’s results therefore constitute the basis for a strong commitment to the Barents Sea in the year. 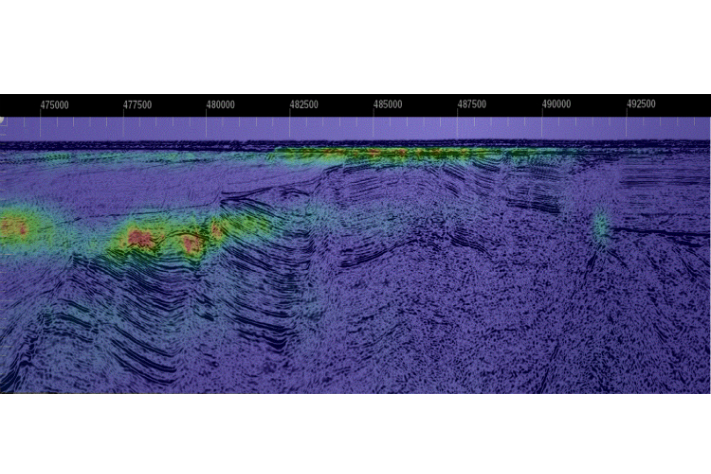 – EM provides an additional data set with the same marine operations within the same time window. We are approaching the day when we can collect EM while we shoot 3D seismic. The concept of «multi geophysics» is getting closer.

– Our ultimate goal is the simultaneous collection of EM and 3D GeoStreamer data, and we have taken a big step with towed EM for a 2D boat, says Midgley.

Midgley thinks PGS is well be positioned to lead the way for further developments. The company has strong seismic and reservoir groups can work together to retrieve most of the data so that geologists can build better models of the subsurface, both before and after it is made a ​​discovery of oil or gas.

– EM fits well into the puzzle where we are trying to pull in the most data to get the pieces in place, says Jonathan Midgley.