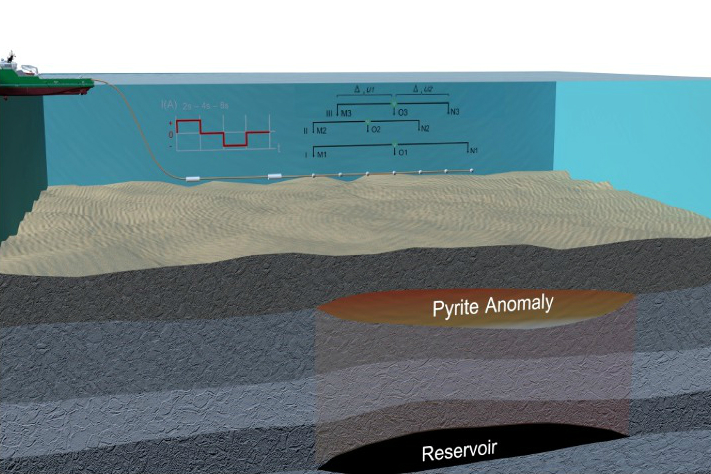 Pyrite forms above a hydrocarbon reservoir as a result of micro-seepage. A vessel towing source and receiver electrodes can induce polarisation in the pyrite and record the resultant distinctive signals. (Source: ORG)

«During 2012 and 2013, ORG conducted a number of test surveys in Norwegian waters across known hydrocarbon fields in order to see if the method was suitable for use in these areas. Over 3,500 line km have been surveyed across 20 fields, 18 of which gave results that corresponded to known drilling results, while one measured anomaly in chargeability was offset from the field and the results of one other are as yet unexplained. Reproducibility tests were also conducted, one in 2012 re-acquiring a line with a less than 1% difference from the original, while further tests of the same line in 2012 and 2013 gave very similar results. The 2013 survey used equipment that had been improved based on the 2012 experience and was judged to give better resolution,» according to GEO ExPro (Vol. 11. No. 3; «Polarizing pyrite«).

«One of the surveys conducted in 2012 was across the Frigg area where the six lines surveyed showed ‘eta’ anomalies above three reservoirs, two in the Jurassic (oil and gas) at around 3,000m+ reservoir depth and one Tertiary oil reservoir at 1,900m depth. A known dry well that was crossed did not have any anomalies associated with it. Similar results were obtained on most of the other fields covered, including the Troll area. As a result of the positive tests, a multi-client survey with eight oil companies was conducted in 2013 in the Norwegian North Sea. Of the seven predictions made as a result of the survey, six have been confirmed as correct. Five of these were discoveries and in one case a dry well was predicted. In 2014, dedicated commercial surveys are due to start, with a typical 200 km survey having some £500,000 ($675,000) acquisition cost, including technical and weather risks,» writes Paul Wood in Geo Expro.

The method will be presented in the forthcoming Hydrocarbon Habitat half-day seminars in Oslo October 21 and Stavanger November 5.