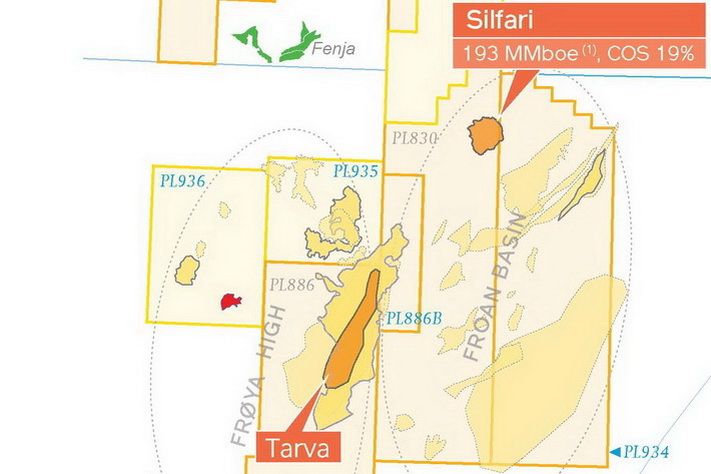 Lundin plans to build a new core area based on discoveries on the Frøya High and in the Froan Basin. The hope is to prove up two billion barrels (!) of oil. Silfari had a potential of nearly 200 million barrels of oil in the Froan basin, but the well was dry. Tarva on the Frøya height will be drilled in 2019, and the prospectivity at height is not affected by this well, Lundin says. (c) Lundin

No reservoir, no oil

Both targets in 6307/1-1 S in the Froan Basin were water-bearing. Before drilling, Lundin claimed a discovery may contain 193MMboe in untested Permian carbonate and Jurassic sandstone plays.

The primary target for the well was to investigate the reservoir properties and the petroleum potential in Permian carbonate rocks (equivalent to the Wegner Halvø formation in the Upper Permian at East Greenland). The well did, however, not encounter reservoir rocks in the Paleozoic succession, acording to a press release from npd.no.

The secondary exploration target was to collect data for potential reservoirs in the Middle to Lower Jurassic (the Fangst and Båt groups). The Tofte formation, approx. 60 metres, has mainly good reservoir quality. The formation is aquiferous.

«This well is the first in the Froan Basin area and has provided significant data points as to the geology of the basin, which will be analysed in order to determine any further prospectivity. The potential of the undrilled, adjacent Frøya High area is unaffected by the Silfari result,» Lundin Norway comments.