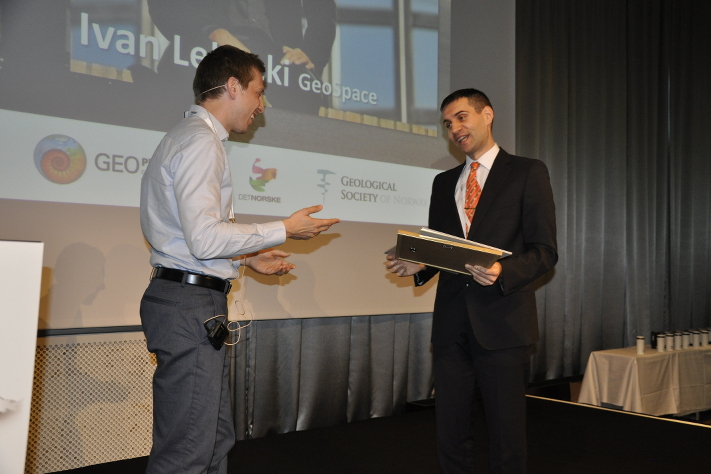 Prisen The Young Petroleum Geoscientist Award gikk i år til Ivan Lehocki. Utslagsgivende var hans bidrag som konsulent og programvareskaper for oljeindustrien. Det ble også lagt stor vekt på hans evne til innovasjon samt godt entreprenørskap.
Det norske sponser premien, og Vidar Furuholt delte ut diplomet og billetten til et besøk på en borerigg. Utdelingen skjedde under middagen på konferansen Recent Advances in Exploration Technology den 20. mai.
The Young Petroleum Geoscientist Award er et initiativ fra GeoPublishing AS og Norsk Geologisk Forening.
Juryens begrunnelse
«The winner of the Young Petroleum Geoscientist Award 2015 was born in Croatia in December 1979. He finished his master’s degree in Geophysics at Eötvös Loránd University in Budapest, Hungary in 2007, and headed to Bergen, Norway in February 2008 to start working for Odin Petroleum, a G&G consulting company. At Odin he learned about rock physics and AVO, and made in-house software codes that were utilized in consulting.
Later he developed statistical rock physics and AVO codes that took into account burial history and cement volume, which is very useful in areas with complex geology and uplift episodes. This tool was used in consultancy work for Lundin Norway before and after drilling the Skalle prospect in the Barents Sea, with very good results. The results were published and presented at the EAGE conference in Copenhagen in 2012, with Ivan as first author. The paper was very well received, and EAGE informed the authors that it was considered one of the best papers presented at the EAGE that year.
In 2012 he started his own company, GeoSpace, with further focus on software codes useful to the oil industry. He made efficient and user-friendly AVO probability and rock physics template codes for Spring Energy before he decided to take on further studies in space sciences. Upon completion of the so called SpaceMaster program in 2014 he obtained a double master’s degree in space science and technology from Luleå University of Technology.
The winner of this year’s award is a true scholar with passion for science in general, and for rocks and waves in particular. He is also a visionary entrepreneur with guts and confidence to start a company on his own in spite of his young age. As the title of his company hints (GeoSpace), he is not only limited to earthly matters, and always looks outside the box for new ideas.
His fascination for outer space has made him sign up for the Mars One competition to get a one-way ticket to Mars in 2027. The Geoscience community should cross their fingers that this excellent geophysicist stays grounded in many years to come. He has already published more than 10 conference papers, and is the first-author on more than half of these.
Nevertheless, we think we have only seen the beginning of a great career in petroleum geoscience that will be of great benefit to the oil industry and the geoscience community in Norway and abroad.»
Juryen består av medlemmene i programkomiteen for konferansen Recent Advances in Exploration Technology. Disse finner du her: ncs-exploration.com.