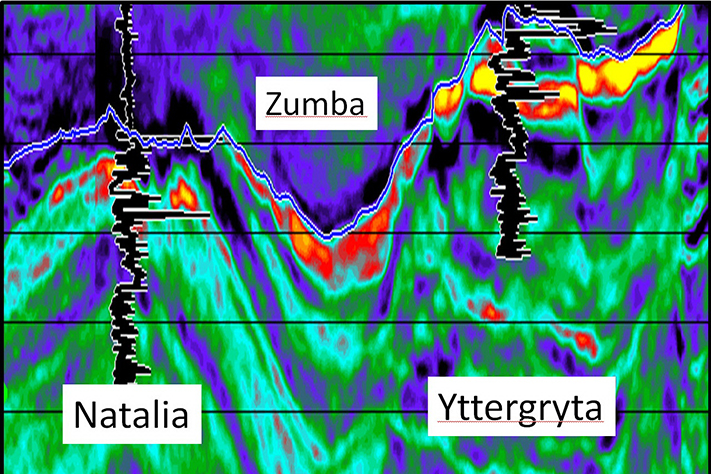 The primary exploration target for the well was to prove petroleum in Upper Jurassic reservoir rocks (the Rogn formation). The secondary exploration target was to prove petroleum in the Middle Jurassic Garn formation, which is part of the Fangst group.
The well did not encounter reservoir rocks in the Rogn formation. The well encountered about 35 metres of reservoir rocks in the Garn formation, of which about 25 metres were of very good reservoir quality.
The Zumba prospect was drilled on the Mid-Norwegian shelf surrounded by multiple discoveries and producing fields. The geologic observations from wells in the area, which were all drilled on Jurassic highs, showed that significant erosion of potential reservoir sands had taken place on these highs.
Contrary to other wells in the area, 6507/11-11 was drilled in a graben setting (named by the PL591 team; the Zumba Graben). Making the Zumba prospect into a drillable prospect was mainly done by quantitative seismic interpretation using inverse rock physics modelling, with a geologic model supported by well data. Unfortunately, the well was dry, but if the concept had been commercially successful, multiple follow up prospects were identified using the same geological and geophysical workflow and could have yielded significant commercial volumes of hydrocarbons. If successful, it would have been a “play opening well”.
Link to press release