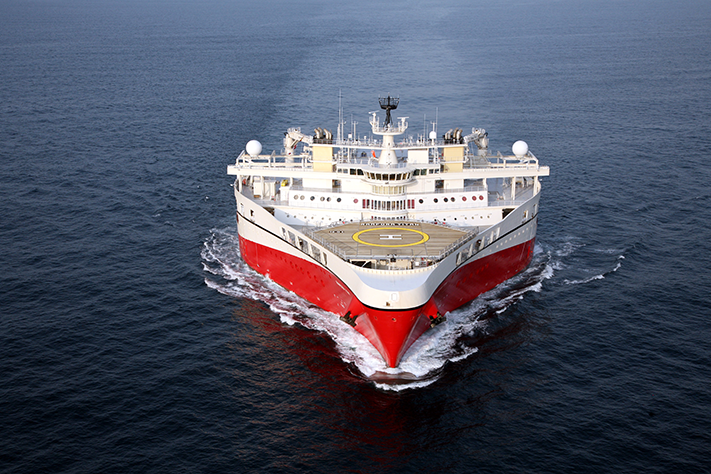 PGS has developed a concept for efficient, large scale collection of plastic from the oceans. The solution uses the inherent benefits of seismic vessels and takes advantage of their air compressors and capabilities for handling large towing configurations.

The PGS plastic collection concept consists of a seismic vessel and a support vessel towing booms, in a fan formation, which are connected to a processing unit at the end of the spread.

The uniqueness of the seismic vessel is its large onboard compressors, which usually supply the seismic source. These are instead used to pump air through a ventilated hose, towed at approximately 50 meters water depth between the seismic ship and the support vessel. The air bubbles attach to the submerged plastic which then rises to the sea surface, just like bubbles are attracted to a straw in a glass of sparkling water.

The processing unit at the end of the collection spread separates organic materials from plastic. The latter is compressed and packaged into super-strong synthetic skins. Once full, each skin section is marked by GPS and AIS, ready to be collected and towed to a processing facility for recycling.

«We have developed an active large scale concept for plastic collection at sea. There are well known garbage geysers in different oceans of the world and our plastic collection concept is intended to take advantage of the currents in these systems and collect plastic before it eventually sinks to the seabed,» says Jon Erik Reinhardsen, President & CEO of PGS.

PGS has four cold-stacked Ramform seismic vessels, which can be used for plastic collection. The benefits of the Ramform vessels are their high propulsion power making them capable of towing large spreads. Their large compressors can generate enough air to lift submerged plastic to the surface. In addition, they have multiple winches for handling complex towing configurations, large deck space for easy, safe operation and accommodation facilities for marine and research personnel.

Cleaning the oceans of plastic is a global responsibility and PGS is seeking external funding for a pilot test of the system.