From 2011 to 2014, we observed the largest oil supply shock in history: US shale oil production was adding more than 1 MMbbld every year, or more than the growth of global demand for oil. OPEC faced a risk of critical reduction in market share. An initial cut of 2 MMbbld from the collective quota during 2014 and 2015 would be needed to keep oil prices at the 2011-2013 level of 110 USD/bbl. On the other hand, such drastic cuts would obviously support a continuous growth of US shale oil production as less than 5% of shale oil recoverable resources are extracted to date (Rystad Energy estimate).

The pain limit for US shale drillers was reached when US oil prices dropped below 50 USD/bbl. In the first week of 2015, with fresh and down-sized budgets, oil companies reduced horizontal drilling for oil for the first time also in the core plays Bakken, Eagle Ford and Permian where rig count went down from 700 rigs to 675 rigs last week. A minimum of 500 rigs drilling horizontal oil wells on these plays is needed to keep production flat on the plays.

Without the invisible hand of OPEC, how fast will oil supply adjust and what is the new balancing oil price (Fig1: Global liquids supply cost curve)? 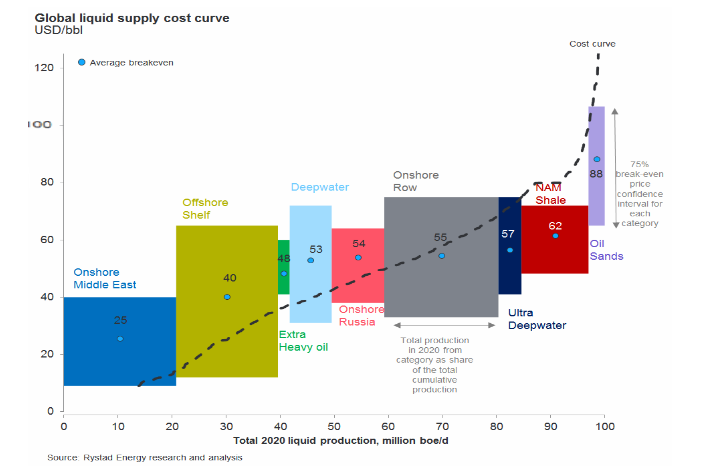 Based on our UCube database with 65,000 global fields, acreages, discoveries and prospects, we have looked at several ways to adjust the oil supply by oil companies. Analysis has shown that the three main effects are:

1)      Reducing in-fill drilling offshore and onshore, the production effects are significant first at 50 USD/bbl, and up to 1 million barrel per day from offshore mature fields is at risk 2-3 years from now. Onshore, we expect Iraq will ease the requirements on the oil companies for production growth in 2015, and in Russia oil production could fall by at least 2-3% per year over the next 2-3 years.

2)      Reducing rig count and completion activity on shale plays (Fig2: Average WTI breakeven oil price by play). In the US, shale production could still grow with WTI oil prices around 50 USD/bbl and after a 50% cut in capital spending during 2015. Actual spending cuts will be determined by the reduced cash flows, lower completion unit costs and high-grading of well locations. We would conclude that US shale may not alone provide the expected floor for oil prices in this bear cycle, but possibly it may provide an effective ceiling in a coming bull cycle (Fig3: Total liquid production from NA shale per month and Brent oil price).

3)      Delaying the development of new projects. This should be the most significant effect in the longer term, with 150 BUSD worth of projects at risk from sanctioning delays only during 2015. Already at 80 USD/bbl, we could see 2 million barrels per day at risk from offshore additions by 2020, and one million barrel per day onshore.

The synthesizes of the above analyses indicates a strong resilience of non-OPEC production in the short run, but also that oil prices far below 90 USD/bbl are clearly unsustainable in the long run. So with sustained low oil prices and largely committed capex, we expect 2015 to be an extraordinarily tough year for the international oil companies. 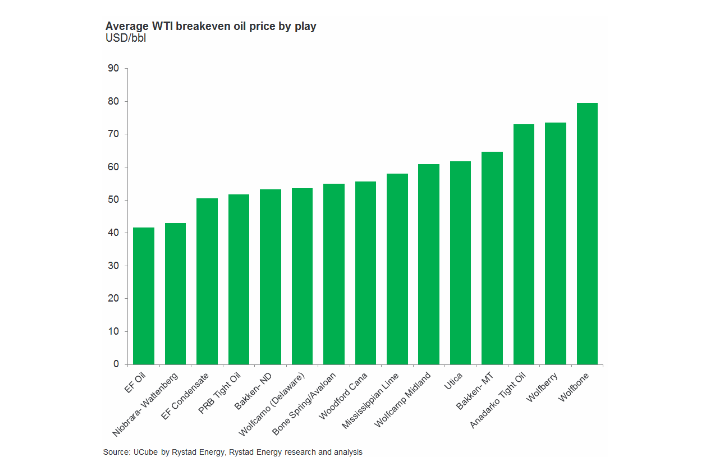 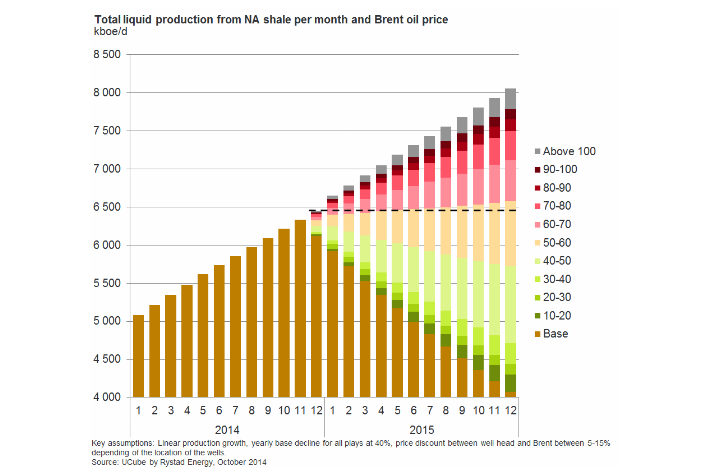