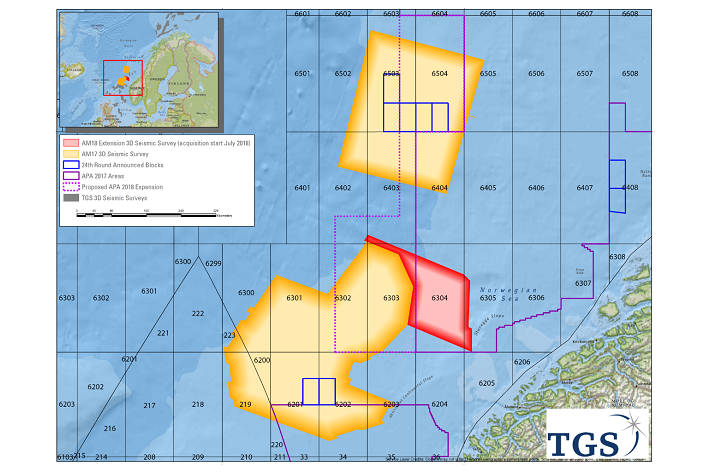 TGS announces an expansion of its Atlantic Margin multi-client program in the Norwegian Sea. The new AM18 3D Extension, will comprise 5,135 km² of 3D seismic data and covers a variety of play models with stratigraphic and structural traps in Paleocene and Cretaceous turbidite/fan deposits. Acquisition will commence early July and TGS is chartering a Shearwater seismic vessel for this survey.

In addition, TGS will continue to acquire the remaining 7,500 km² from the previously committed area. Acquisition will commence end of May and will be undertaken with Polarcus’ Adira seismic vessel. Following completion of this survey, the TGS data library will have more than 45,500 km² of new modern 3D data in the region.

«A significant milestone for TGS in 2017, was the commencement of an extensive 3D survey in the central-southern Norwegian Sea called AM17. The project is the single largest 3D survey carried out by any company in Northern Europe and covers mainly open blocks in a relatively under-explored area with limited drilling to date.

The AM18 Extension falls predominantly within the annual APA licensing round area which is suitable for short-term development. Further offshore licensing and development interest in the area surrounding the producing Ormen Lange gas field is expected through 2018 onwards,» said Kristian Johansen, CEO, TGS.

This project is supported by industry funding.