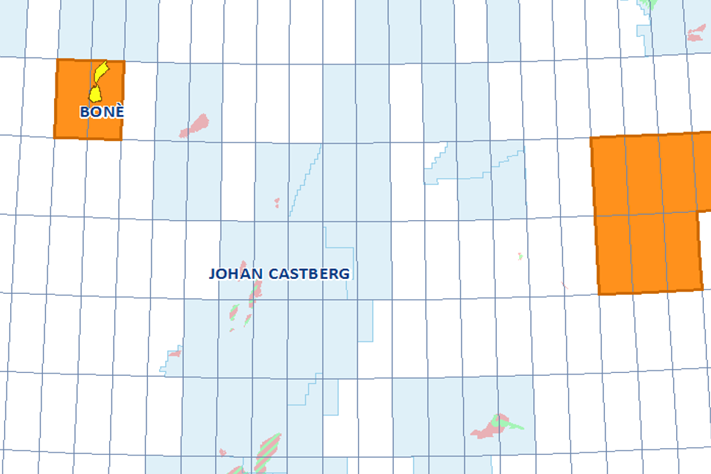 Boné (Dazzler) exploration well 7318/12-1
Licence PL716, which contains the Boné prospect (previously named Dazzler), is located in the western part of the Norwegian Barents Sea in a similar structural setting to the Johan Castberg discovery. The primary targets for the well are the Jurassic Stø- and Nordmela sandstones with a secondary target within the Triassic Fruholmen and Snadd sandstone formations.
PL716, Boné (Dazzler) 7318/12-1
Faroe: 20%
Eni Norge AS: 30% (operatør)
Bayerngas Norge AS: 20%
Petoro AS: 20%
Point Resources AS: 10%

Brasse Discovery appraisal well
The Licence PL740 partnership has committed to the drilling of an appraisal well on the Brasse discovery in mid-2017 (Faroe 50%). Faroe as operator has entered into a contract with Odfjell Drilling for the use of the semi-submersible drilling rig, Deepsea Bergen, for the drilling operations.
Faroe announced the Brasse oil and gas discovery in PL740 in July 2016. The main wellbore 31/7-1 encountered an 18 metre gross gas column and a 21 metre gross oil column, and the sidetrack well (31/7- 1A) encountered a 6 metre gross gas column and 25 metre gross oil column, with both wells encountering good quality Jurassic reservoir. Total gross volumes of recoverable hydrocarbons have been estimated by the Company to be 28-54 mmbbls of oil and 89-158 bcf of gas (43-80 mmboe gross in aggregate). The main objectives of the appraisal well are to reduce the uncertainty in the reserves estimates and to provide important additional information for the development project.
Graham Stewart, Chief Executive of Faroe Petroleum commented:
“We are very pleased to announce the spudding of Boné, our first exploration well in 2017, located 90 kilometres to the northwest of the Johan Castberg discovery. This high impact well will test a large horst structure with very significant volume potential.

“We are also pleased to announce the forthcoming appraisal well on the Brasse licence which will serve to mature this discovery towards development. Together with Point Resources we are progressing feasibility studies which will be ongoing in parallel with the appraisal project.
“2017 will be another significant year for Faroe. We have a very full programme ahead of us in our core areas including exploration, appraisal, infill drilling and early stage development activity. Coupled with our strong production profile, solid cash position and recently increased and substantially undrawn debt facilities, we look forward to another period of growth across the business.”