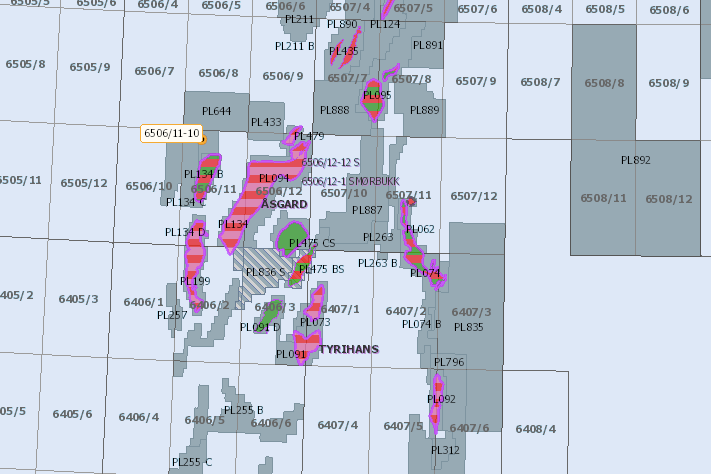 The Fogelberg appraisal well (6506/9-4 S) has been drilled targeting the gas and condensate bearing Middle Jurassic Garn and Ile formations in order to assess the lateral and down-dip extent of the discovery and firm up the resource range. The appraisal well successfully penetrated the Garn and Ile formations, encountering 62.5 metres of gross hydrocarbon-bearing Garn reservoir. Gas was also logged in the Ile Formation. Preliminary results based on extensive coring, wireline logs, pressure data and fluid sampling show that the well has confirmed gas and condensate in a sand-rich reservoir. The reservoir quality is better than that seen in the original discovery well, 6506/9-2 S, and when combined with a confirmed deeper gas-water contact has led the partnership to the decision to carry out a drill stem test (DST) to confirm well and reservoir productivity.  A further update on potential recoverable volumes, together with the results of the DST, will be made once completed.
Fogelberg is located 18 kilometres north  of the producing Åsgard Complex, where large quantities of gas and condensate have been and continue to be produced and transported to several landing points on the European continent.
The joint venture partners are Spirit Energy Norge AS (operator 51.7%), PGNiG Upstream Norway AS (20%) and Dyas Norge AS (13.3%)2.

“We are pleased to announce the encouraging update on the Fogelberg appraisal well. The next stage in the appraisal is the running of a DST, to confirm producibility and potential commerciality. We will update the market when there is further information in relation to results from the DST and the potential development options.
“Looking ahead to Faroe’s 2018 exploration programme, aside from the recently announced successful nearby Iris/Hades well in the Norwegian Sea, our next well will be the Faroe-operated Rungne well in Q3 2018, followed by drilling of the Cassidy and Pabow prospects later in the year.”
Pressemelding