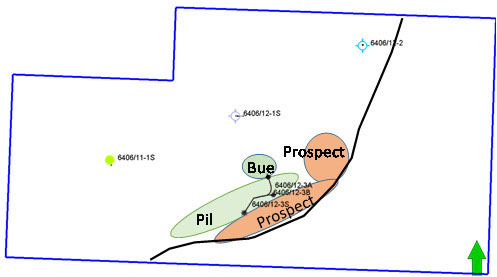 Rocksource ASA (“Rocksource” or “Company”) recorded yet more success in second quarter 2014. Hard on the heels of the successful appraisal well on the Pil discovery in PL 586 followed a further discovery on the adjacent Bue prospect. Combined Pil and Bue resources are estimated in a 95 to 175 million barrels of oil equivalent (“mmboe”) range by Rocksource, with Pil representing the lion’s share of this figure. Pil is regarded as one of the most significant finds on the Norwegian Continental Shelf (“NCS”) in recent years. Major potential remains within the licence. This has led to a high impact drilling programme being planned for PL 586 to commence in first half 2015 with a minimum two back-to-back exploration wells scheduled.  The rig has been secured. In the event of success in 2015, further upside exists and has been identified within the licence. The success on Bue made it a “hat-trick” of finds this year. It has reconfirmed Rocksource’s view that a significant commercial accumulation has been discovered with the potential to be a company-maker. Prior to embarking on a new drilling campaign in the Pil licence, Rocksource will take part in the Ivory exploration well in PL 528 in the Norwegian Sea. This well is currently estimated to commence drilling in September/October. Rocksource is primarily focused on the NCS, consequently the Company continues to seek partners for its GoM portfolio. Progress remains slow, but discussions with potential counter-parties continue. The NOK 43 million rights issue combined with a NOK 175 million increase in the exploration credit facility ensured working capital for the remainder of 2014. Focus now is on funding for 2015 and beyond. The Company is investigating various alternatives, including sale of assets in the GoM, sale of assets – or parts of assets – on the NCS, issue of additional equity, or a combination of these. It is the Company’s firm view that its financial flexibility has improved as a result of the Pil discovery. The interim report and Company presentation for 2Q 2014 you can read here: 140819 Pil & Bue Rocksource