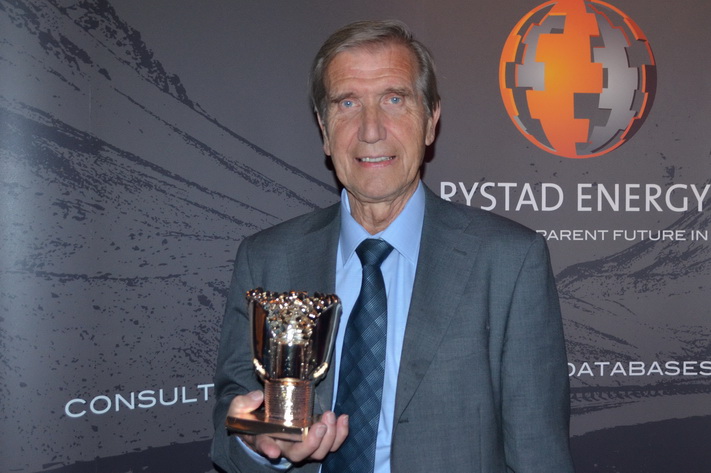 "The resources in the North Sea created the possibilities. People and their knowledge created the technology. Anders Farestveit created Geco. For posterity, he will be the only world champion in seismic acquisition." (GEO ExPro No. 3, 2008). Denne uken ble han tildelt Gullkronens "Honour Award"- Foto: Halfdan Carstens

Geofysikeren Anders Farestvteit startet karrieren med å skyte seismikk på Hardangerjøkulen. Oppgaven var å finne ut hvor tykk isbreen var. Men det tok ikke lang tid før han begynte med marin seismikk, og konkurransemannen så raskt at norsk kompetanse kunne gjøre like god jobb som amerikanerne. Derfra tok det ikke lang tid før han skapte Geco. I dag kjent som WesternGeco eid av Schlumberger.
Farestveit har gjort mye spennende etter dette, og nå er han tungt inne i havbunnsseismikk gjennom Magseis. Men det var først og fremst pga. at han grunnla Geco at han på onsdag kveld denne uken fikk tildelt æresprisen under Rystad Energys Gullkronen-arrangement.
Her er juryens begrunnelse:
«This year’s winner has been a significant contributor to value creation at NCS, not as a politician or an oil company top manager like previous Gullkronen award winners. For the first time the honour prize winner is a true technologist. This person is the one behind technologies that makes it possible for us to see the unseenable and to understand what mother earth is saying.
The prize winner has not only founded companies, but a new industry by building it from the ground up. He was perhaps the first Norwegian who made a fortune within his field. Well into normal retirement age he is still a major contributor to continuous renewal of this industry. He started as a student in the 1960s as Professor Sellevoll’s most outstanding student in Bergen. He was the first to measure the thickness of Hardangerjøkulen using modern technology. He then went on to measure the sedimentary basins from Svalbard to Bjørnøya for Total, who found it the most efficient operation they had ever experienced.
Certainly, we are talking about the seismic industry, and the founder of Geoteam and Geco, providing images that enabled the discoveries of all the major fields at NCS. He was top manager of the company starting with only one person until he sold it to Schlumberger 15 years later with more than 2000 employees. He had a unique way of combining technological and geological insights into practical industrial solutions with high efficiency. In 1993 he was named Oilman of the Year by the Society of Petroleum Engineers (SPE). Since then he has also been focusing on catching the secrets of the S-wave through ventures like Wavefield Inseis and Magseis as well as exploring opportunities in the electromagnetic wave technology through companies like EMGS.
He is described as a visionary, with strong instinct for competition, an able salesman, an excellent negotiator and moreover the top class in his field.»