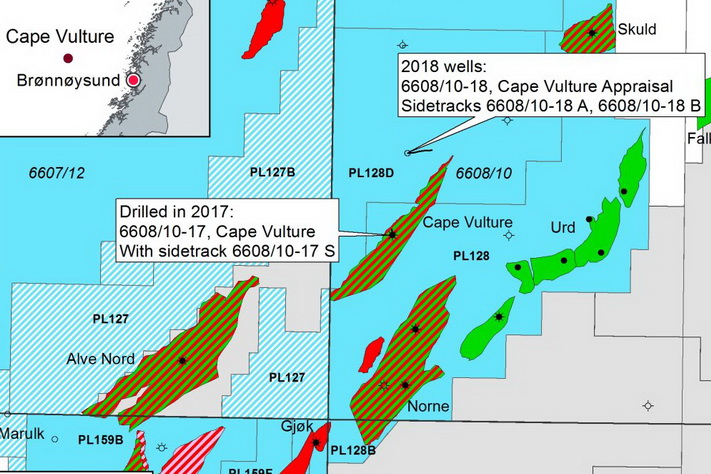 The discovery demonstrates that considerable resources may still be recovered through existing infrastructure on the NCS.

Equinor has drilled 3 appraisal wells on the Cape Vulture oil and gas discovery north of Norne. The resource estimate is now much more accurate.

“The discovery demonstrates the importance of our new exploration strategy. We intend to take new approaches and try out new and untested ideas to unlock the remaining commercial resources on the Norwegian continental shelf (NCS). This is in line with Equinor’s recently updated roadmap for the NCS, which aims to secure activity for many decades to come,” Ashton maintains.

The 6608/10-17 S (Cape Vulture) oil and gas discovery was originally proven in two zones in Lower Cretaceous reservoir rocks (the Lange formation) in 2017. Before these appraisal wells were drilled, the operator’s resource estimate for the discovery was between 3 and 13 million standard cubic metres (Sm3) of recoverable oil equivalents (between 19 and 82 MMboe).

Preliminary estimates of the size of the discovery after the appraisal drilling are between 8 and 11 million standard cubic metres (Sm3) of recoverable oil equivalents (between 50 and 70 MMboe).

The objective of the wells was to delineate the two reservoir zones in the 6608/10-17 S oil and gas discovery, as well as to investigate a new underlying, third reservoir zone in the Lower Cretaceous (the Lange formation).

According to Equinor, the well more than doubles the remaining oil reserves to be produced through the Norne field.

Equinor also says that «originally planned to be shut down in 2014, the productive life of Norne has already been extended to 2036, which will generate substantial spin-offs. This discovery will boost production in the years to come. The further maturing of the field development has an upside potential for additional recoverable reserves from Cape Vulture.

The appraisal wells encountered oil in three reservoir zones in the Lange formation. The oil/water contacts were not encountered in the three reservoir zones, but were established with the aid of well 6608/10-18 B. The total proven oil column in the uppermost zone is about 80 metres. In the middle zone, a 13-metre gas column was proven, as well as a total oil column of about 110 metres.

In the uppermost zone, 6608/10-18 A encountered an oil column of about 10 metres, of which 5 metres in sandstone with good to very good reservoir properties.

In the middle zone, oil columns of about 15 and 10 metres were discovered in wells 6608/10-18 and 6608/10-18 A respectively, of which 5 metres in sandstones with moderate to good reservoir properties in both wells.

In the deepest zone, 6608/10-18 encountered oil in a 2-metre thick sandstone layer with good reservoir properties.

The licensees will assess the discovery further with a view toward potential future development via the Norne FPSO.

The programme is nearly completed:

Yet to Find: A World-Wide Perspective

Yet to Find: UK and Norwegian Perspectives

Yet to Find: A Geological Perspective