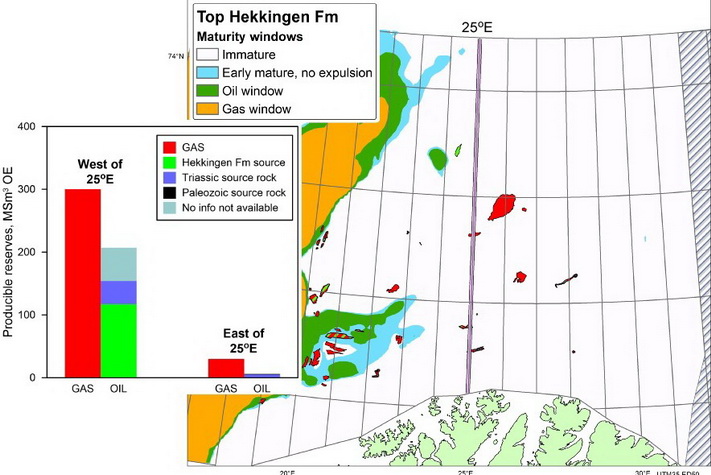 Oil and gas reserves (producible) in the Norwegian Barents Sea to the west and east of 25°E. Likely source rock origin for the oil reserves are indicated. The background colour map shows present day distribution of maturity windows for Top Hekkingen Fm, the main source rock in the area. (c) Torbjørn Throndsen

– Geochemical data from oil and gas accumulations indicate that there are at least three working source rocks in the Barents Sea, most likely the Upper Jurassic Hekkingen, the Middle Triassic Kobbe and Carboniferous Tettegras Fm.
In terms of oil producible reserves the Hekkingen Fm is by far the most important, but Triassic source rocks have also contributed with significant oil volumes. Reserves with origin in the Tettegras Fm are very small, says Torbjørn Throndsen of Torena. Throndsen has considerbale experience in the Barents Sea as he has been involved since the very first round 35 years ago.
There are more source rock possibilities in the Norwegian part of the Barents Sea than discussed above, according to Throndsen, both in the Tertiary, Cretaceous, Triassic and Paleozoic sections, but their properties, thickness and areal distributions are poorly constrained and represent high risk elements in possible petroleum systems.
Throndsen also demonstrates that the areal distribution of the proven reserves is distinct. About 98 % of the oil and 90 % of the gas reserves occur west of 25°E, and most of the gas reserves east of 25°E are limited to the Norvarg gas discovery.
Throndsen also says that we find the low-risk areas where the Hekkingen Formation is present, mature and occurs with appropriate timing and immediately updip of these areas.
In the December 10 seminar – the 23. round is closed – what’s next? – in the series Hydrocarbon Habitats, Throndsen will give at talk entitled: Source rock potential, maturation and migration in the larger Barents Sea. An extended summary based on 35 years of trying and failing.Where do we go now ?
Hydrocarbon Habitats- Programme
Registration

December 2 wasthe deadline for submitting an application in the 23rd licensing round. So what’s next in the frontier provinces of the Norwegian Continental Shelf?  Where can we find another giant? How much can we expect to find? Where are the new trends? Which areas can be explored? In the December seminar, we will try to give some answers, and we will facilitate a discussion concerning the future of exploration and production in both mature and frontier areas.