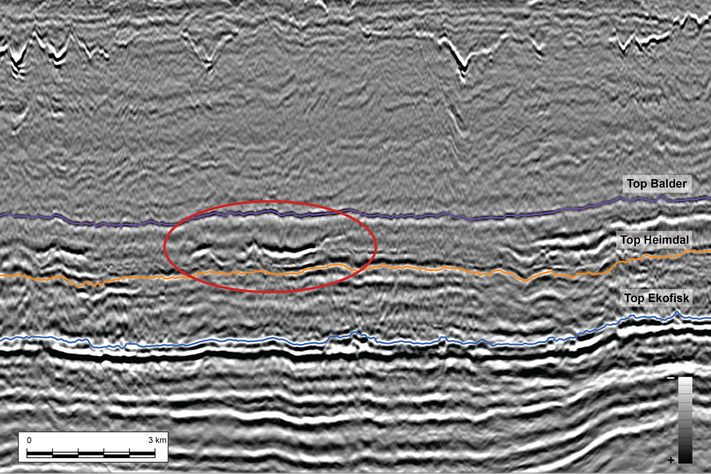 The seismic section shown above is an image of a currently un-drilled feature close to the Bøyla, Jotun and Grane oil fields with good indications of being an injected sand.
The top of this Late Paleocene feature is showing a negative intercept and a clear seismic amplitude brightening with angle.
The wing-like reflections can be interpreted as dykes which have intruded into the overlying Balder Formation and are belonging to the two connected saucer-shaped features above the mother sand.
Relative elastic attributes such as acoustic impedance and Vp/Vs were estimated and calibrated to the Bøyla discovery and dry wells nearby.
This has helped in de-risking this geological feature as a sand body with a high likelihood of being hydrocarbon filled due to its anomalous negative relative Vp/Vs response.
The injectite shown was previously missed by three exploration wells (the latest in 2011) targeting deeper structures.
The prospect will be discussed in detail in the forthcoming Hydrocarbon Habitat seminars February 16 and 17 (Oslo/Stavanger).
Registrer.