Spirit Energy takes over operatorship of the Babbage Gas field in the UK North Sea from Premier. The sale of Premier’s interest to Verus is completed.

In April 2018 Premier Oil announced the sale of its interests in the Babbage Area to Verus Petroleum. The deal included a 47% interest in the Babbage gas field, a 50% interest in the Cobra discovery and certain outstanding exploration commitments. The transfer of operatorship from Premier to Spirit Energy for both the Babbage Field and the Cobra license was subject to completion of Premier Oil’s divestment. Premier has now confirmed that the sale is completed.

The Babbage field in P456 is now owned by Verus (47%), Dana Petroleum (40%) and Spirit Energy (13% and operator). In licenses P2212 and P2301, which contain the Cobra discovery, Spirit Energy and Verus now both hold 50%. Spirit Energy plans to drill an additional well on the Python prospect in Q2 2019 here to prove up reserves.

Read the full press release from Spirit Energy and Premier.

Geology and prospectivity in the Babbage area

The Babbage field’s reservoir lies at a depth of 3,200m in the lower Leman Sandstone Formation (Permian Rotliegendes). It is a north-west trending tilted fault block, which created tightly fault-sealed compartments.

The Python prospect is a narrow, elongated fault-bounded horst with the same Rotliegendes Leman Formation sandstones as target (see map). The challenge here is the small size of the (original) prospect and the reservoir properties of the Leman Sandstones. 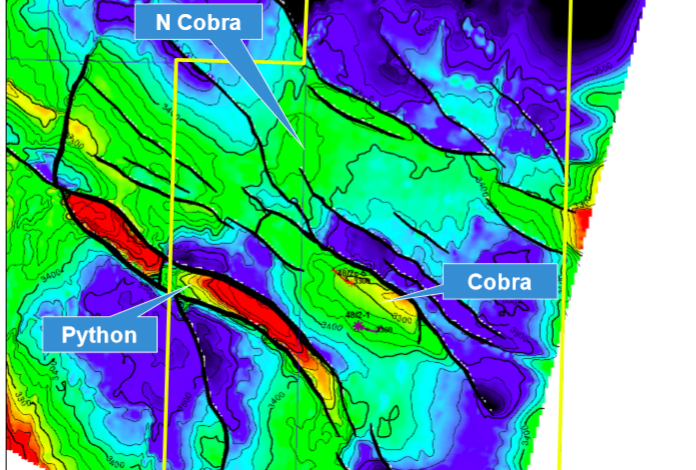