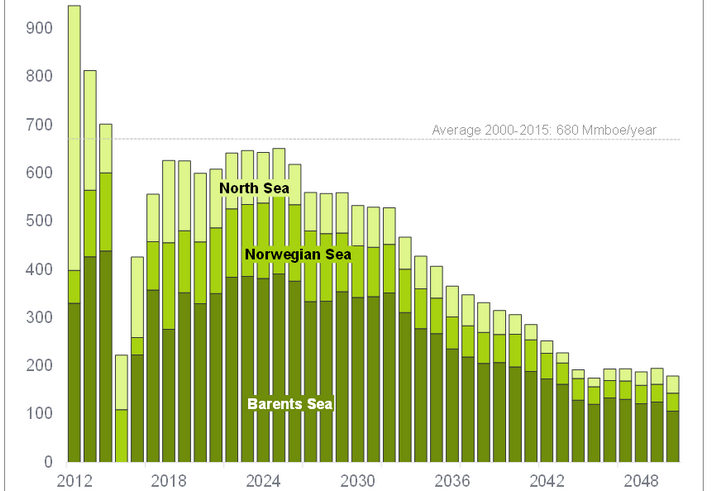 The future is bright. In particular for the Barents Sea. Some 10 billion boe remains to be found up north. (c) Rystad Energy

The future is bright

Forecasts by Rystad Energy indicate that some 4-500MMboe will probably be found per year during the next 20 years. Oil and gas is here to stay.

Despite the recent disappointments on the NCS with respect to exploration («Disappoinint exploration success«), there is enormous value yet to be realized on the NCS. Acccording to NPD, total undiscovered resources are estimated to be close to 20 billion boe. About half of this is expected to be in the Barents Sea («Tror fortsatt på nye funn«).
Forecasted exploration results on the NCS three decades ahead clearly demonstrate that exploration activity will be high for many years to come. Rystad Energy estimates that some 15-20 billion boe are yet to be found, and yearly exploration results over the next 20 years could be similar to what we have seen in the last 15 years, roughly 600 MMboe per year.
The Barents Sea will be the key exploration province, but exploration activity will continue both in the Norwegian Sea and in the North Sea.
At NCS Prospects (November 1-2) we will discuss the best strategies to realize this potential and make connections that will enable us to monetize on the discovered values.