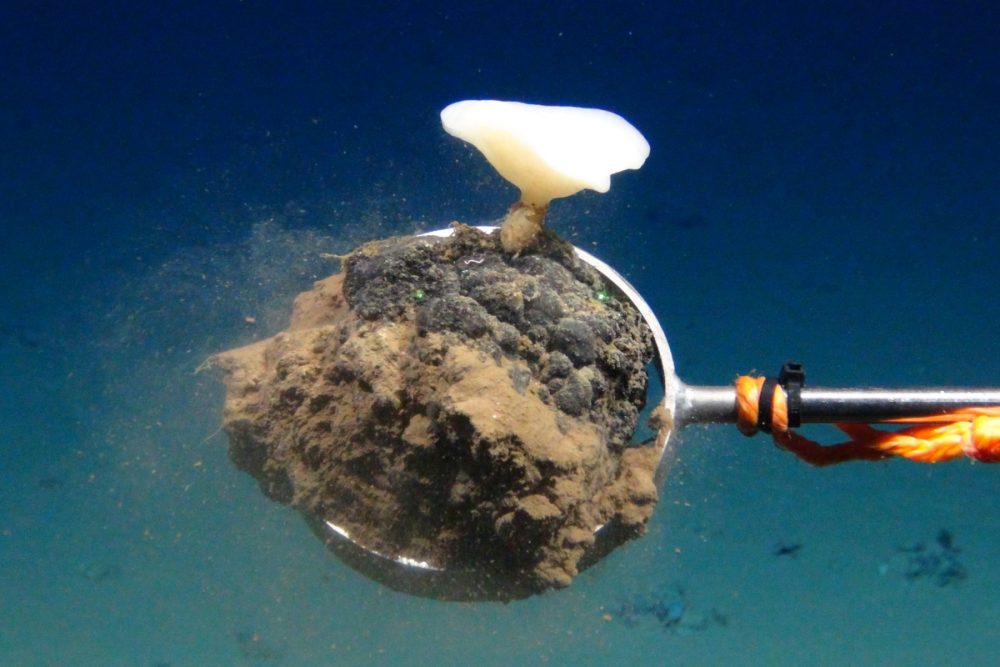 Plenty of “rock batteries” on the ocean floor

Seabed mining for manganese nodules may take place very soon. Suitable technology is now beeing tested. But the operations are not without a dilemma.

Figure caption: Manganese nodules are formed as accretions at 4500 meter in the deep Pacific Ocean. They grow very slowly, about 1 cm per every million year, meaning that the potato-sized nodule shown here is 10 million years old. The habitat formed by manganese nodules is home to specific sessile and mobile fauna. Photo: ROV-Team, GEOMAR

There is currently no ongoing mining for ferromanganese nodules. It has, however, been demonstrated how it can be done.

Nodules were first discovered by HMS Challenger that circumnavigated the globe between 1872 and 1876. Everywhere they went and sampled the seafloor, they brought up nodules. Large quantities of manganese nodules displaying a wide range of morphologies and internal structures were recovered from the Pacific, Indian and Atlantic Oceans. Later, in the 1960s it was stipulated that they might represent an unlimited supply of mineral resources.

“Polymetallic nodules, also called manganese nodules, contain four essential battery metals: cobalt, nickel, copper, and manganese, in a single ore. Formed over millions of years by absorbing metals from seawater, these nodules lie unattached to the abyssal seafloor and are almost entirely composed of usable materials. Unlike land ores, they do not contain toxic levels of heavy elements, and producing metals from nodules generates 99% less solid waste, with no toxic tailings.”

Today, several companies are pursuing nodules, in particular in the Clarion-Clipperton Zone (CCZ), and – according to a talk given by Harald Brekke at a GCE Ocean Seminar in June – the International Seabed Authority (ISA) has issued 17 licences covering some 150 000 km2 in the area, while 1 licence is issued in the Indian Ocean.

Anthony O’Sullivan, Chief Development Officer at The Metals Company, will give at talk entitled “The Exploration, Resource Evaluation, and Development of the NORI – D Area in the Clarion Clipperton Zone (CCZ) of the Pacific Ocean” at Deep Sea Minerals, October 20-21, in Bergen, Norway. 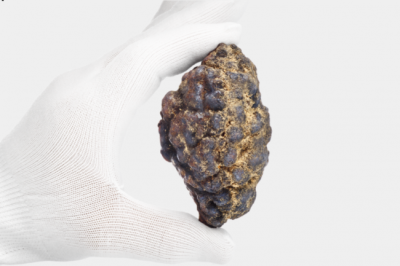 A strange piece of rock

The Metals Company have given the name “rock batteries” to these nodules. This is because polymetallic nodules contain rich concentrations of the base metals needed to make batteries, such as nickel, copper, cobalt and manganese.

Operations that do not exist

One possible method to harvest nodules is as such:

The primary tool is a collector vehicle that is essentially a vacuum cleaner that drives around, picking up nodules as well as the top 5-15 cm of the seabed. Sediments that are not wanted will pass through the collector vehicle and be immediately returned at the back.

The nodules will be pumped up to the surface through a riser and then brought to land for processing.

GSR describes their Patania II technology this way: “Patania II is equipped with four vacuum cleaner style collector heads that direct a waterjet above the nodules, creating a negative pressure, lifting the nodules off the seabed before fluidising them to be transported. Next the nodules are separated from the sediment, which is returned to the seafloor. In the future, nodules will be brought up a riser pipe to the surface vessel where they will be transported to land for processing”.

Patania II operates at 4.5 km below the surface and is the pre-prototype of a seafloor nodule collector that was designed to withstand pressure of over 451 bar. Video.

Last year, the Norwegian company DeepOcean assisted The Metals Company in gathering some 75 tons of nodules in the CCZ. 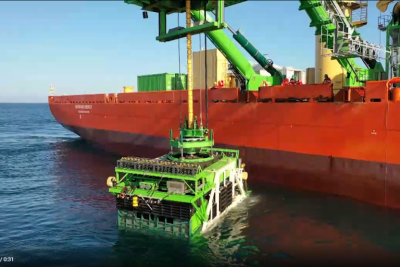 Patania II being lowered into the ocean. Photo: GSR (screen dump from video)

A major part of the mobilised sediments (>95%) is handled from the seabed operations, while the remainder (2-5%) needs to be considered after processing at the surface.

A challenge then is that life in and around the nodules will be impacted by sediment plumes resulting from the seabed operations.

Obviously, the question is how far will the sediment plumes go. The answer to this, we do not know, at least not yet. Another question is how the various forms of life will respond to this man-made sedimentation event.

It’s also worth noting, according to The Metals Company, that nodule collection is projected to impact 40,000 km2 of the abyssal seafloor per year for 30 years. This is less than 1% of the estimated 4,900,000 km2 of the seafloor impacted every year by trawling.

Thomas Peacock, Professor in oceanography at MIT, will give a talk on the impact of sediment plumes at Deep Sea Minerals, October 19-21, in Bergen, Norway.

For additional knowledge about “the deep sea dilemma”, see this article in Nature: Seabed mining is coming — bringing mineral riches and fears of epic extinctions.”

“The International Seabed Authority has designated nine areas as Areas of Particular Environmental Interest (APEIs), which are currently protected from mining activities. These areas each cover ~160,000 square kilometers (61,775 square miles) and are located around the exploration license areas. The APEIs were placed across the CCZ to protect and represent the full range of biodiversity and habitats in the region, including variations in nodule abundances, food availability, and seafloor topography (including the presence of seamounts).”

Call for Papers DIGEX is the conference on digitalization for the geoscience community and surrounding industries in Norway. At the conference, we look at how digital technology is enabling the oil

DIGEX is the conference on digitalization for the geoscience community and surrounding industries in Norway. At the conference, we look at how digital technology is enabling the oil & gas industry to change the way geoscientists work, across teams, companies and license partners.

At the conference, we look at concrete examples of how companies are embracing the possibilities in digitalization and how they are changing their workflows and approaches to the entire value chain from a subsurface perspective.

© 2019 GeoNova AS All rights reserved.
X
We use cookies to ensure that we give you the best experience on our website. If you continue to use this site we will assume that you are happy with it.Ok