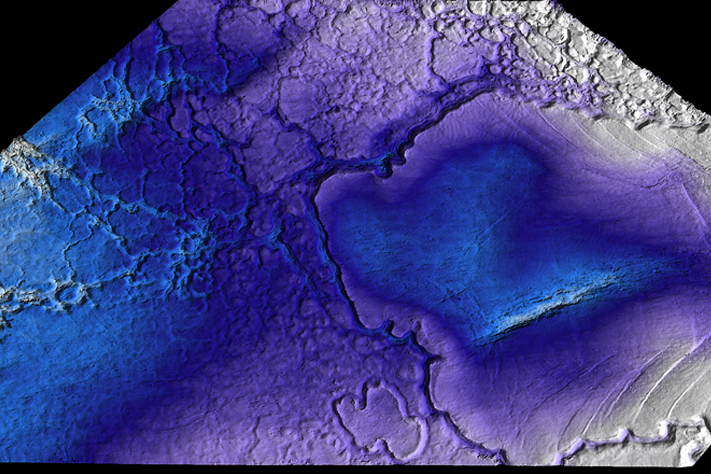 Advanced imaging in combination with regional rock physics analysis across the Haapet Dome suggests high porosity reservoirs in the Jurassic and a potential for prospectivity in the Triassic.

The Barents Sea will get a lot of attention in years to come. The reason being that more than 50% of the undiscovered resources on the Norwegian Continental Shelf (NCS), according to the Norwegian Petroleum Directorate, are expected to be found in this huge area.
In the eastern part of the Barents Sea, including the Haapet Dome where Statoil has now completed drilling 7435/12-1 Korpfjell (Figure 1), geologists and geophysicists are met with considerable challenges. 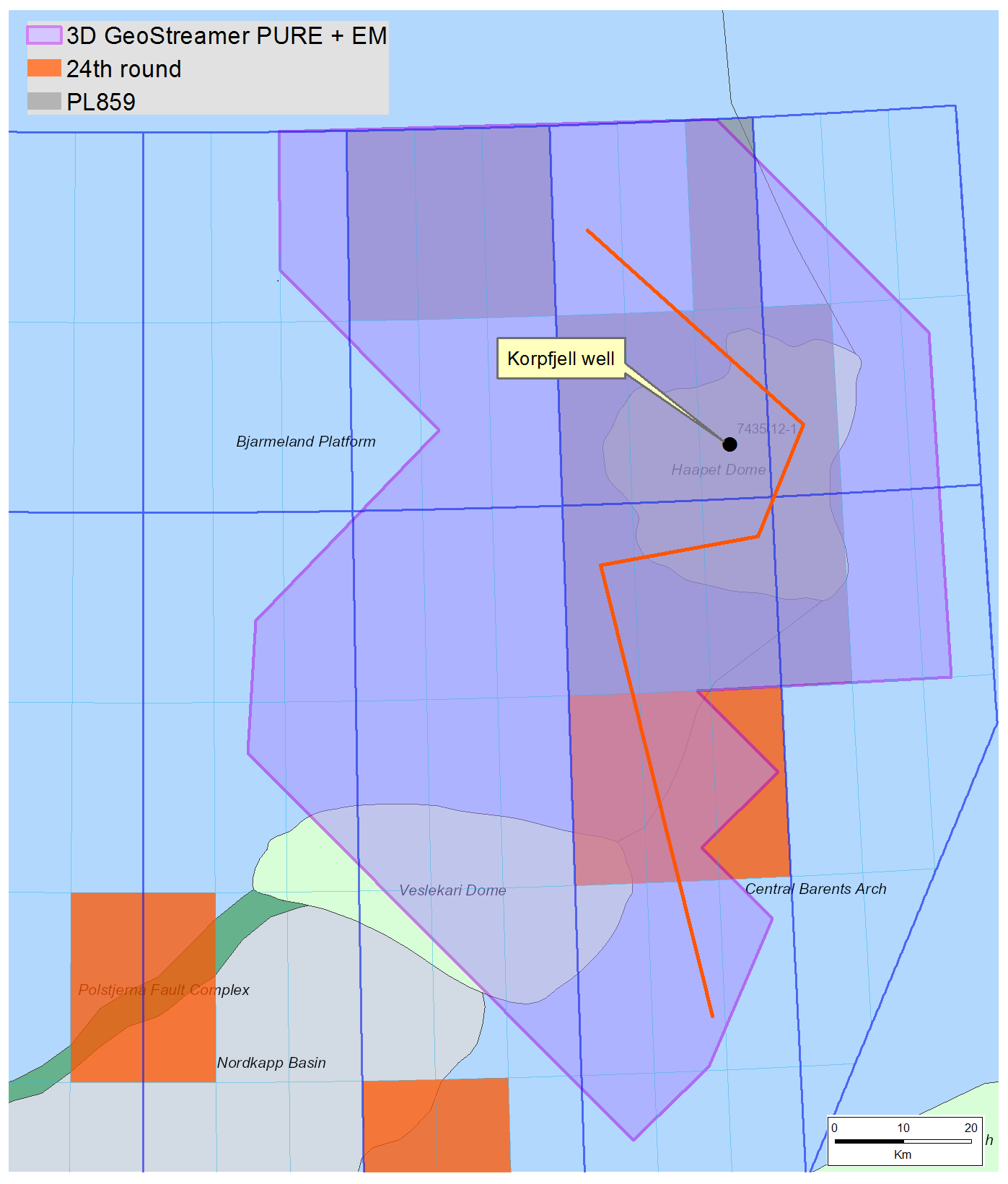 The seismic acquisition on the Haapet Dome took place in 2014 (Figure 1 & Figure 2), and PGS designed an advanced imaging workflow tailored to shallow targets by exploiting the rich imaging possibilities offered by the seismic data recorded with dual-sensor GeoStreamer.
Favourable reservoirs
To investigate the prospectivity potential using quantitative interpretation of the pre-stack seismic data it was necessary to generate a rock physics model applicable to the Haapet Dome and take the regional uplift into account. This task was challenging as the closest exploration well (7228/1-1) was located 250 km away.
– We generated paleo-trends for P-velocity, S-velocity, porosity and density as they were prior to the uplift, Laurent says.
The model was built using 14 wells across the Barents Sea, in various uplift regimes. With published, well-established uplift and erosion model for reference, each well was corrected for the amount of uplift estimated to have occurred locally.
– Rock physics modelling has led us to believe that there are viable targets in both Jurassic and Triassic reservoirs on the Haapet Dome, says Laurent. 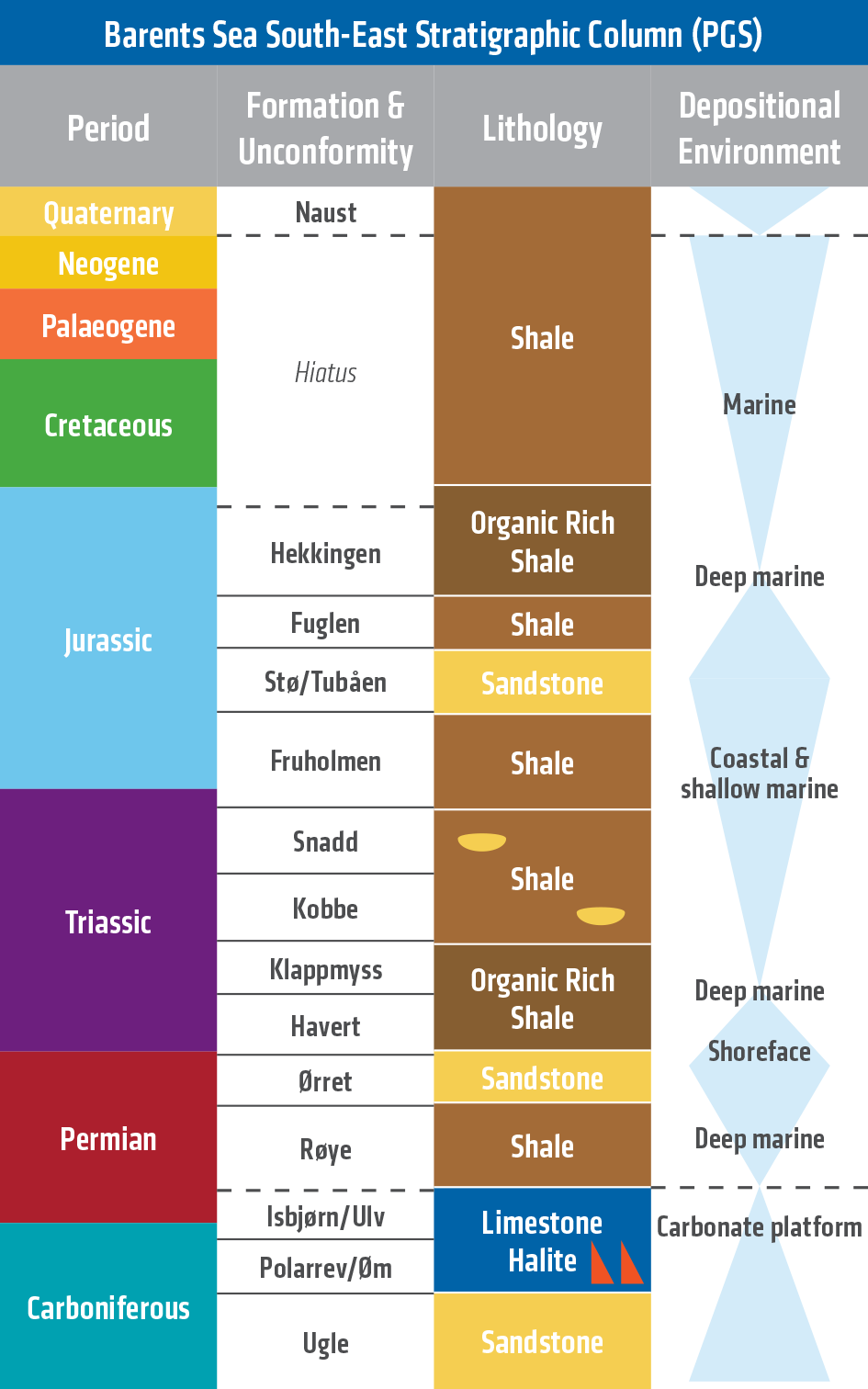 The study concluded that on the Haapet Dome the shallow Jurassic sandstones (only 300 meters below seabed) may have porosities beyond 20%, maybe as high a 25%, while the Triassic Snadd and Kobbe reservoirs (Figure 3) (buried at 1200 and 2300 meters may have porosities of 15% and 12%, respectively (Figure 4). A recent press release from Statoil regarding the Korpfjell well results suggests very good reservoir quality as expected in the Jurassic interval. The same report suggests a lower reservoir quality in the Triassic; however the positioning of the well might not be ideal to sample the best Triassic sandstones. 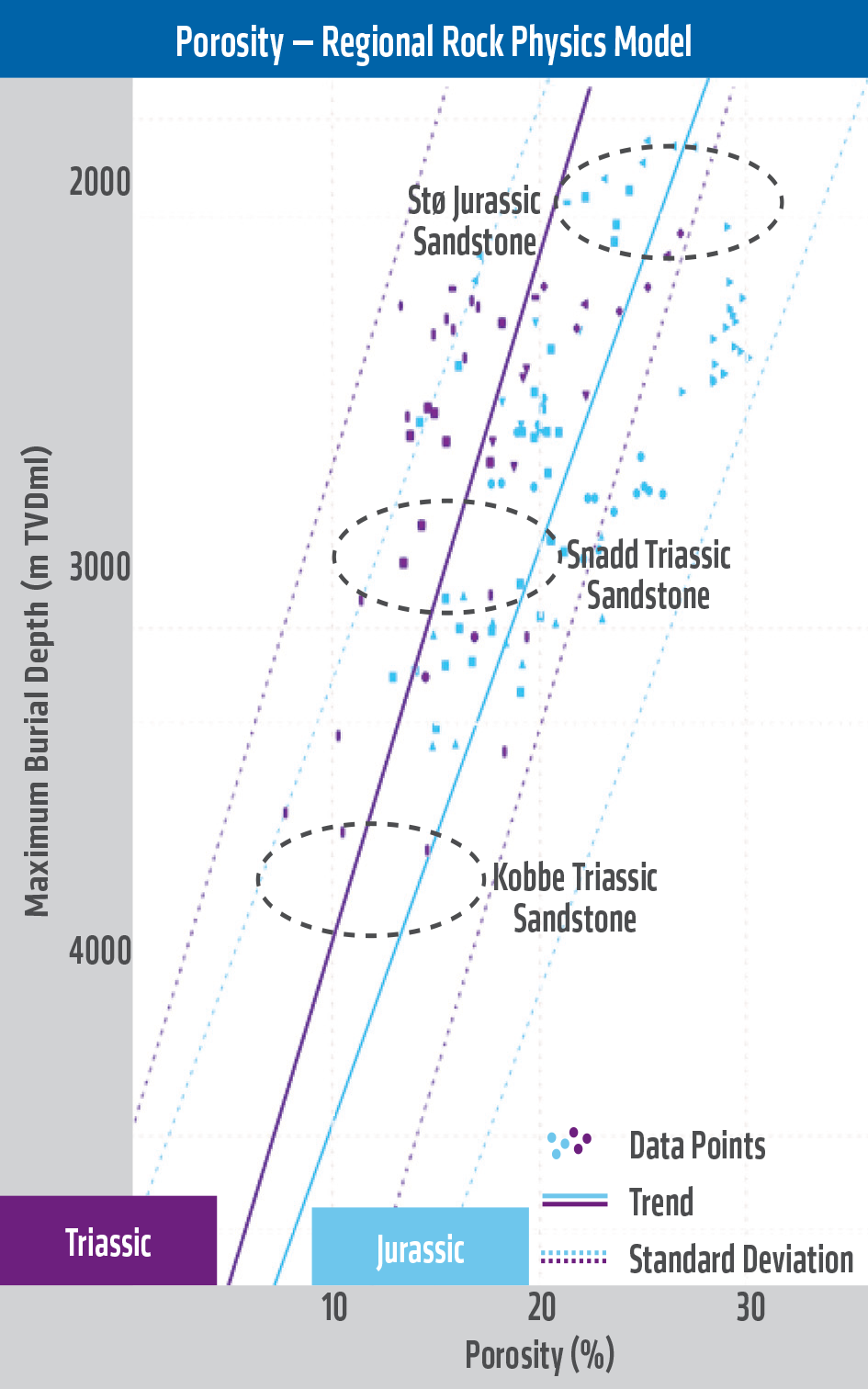 This hypothesis is based on an assumption that the level of uplift affecting this zone was in the order of 1500 m. PGS also assumes that no form of low-temperature or low-pressure diagenesis affected the rock properties after the uplift occurred. The rock properties would therefore remain the same as they were at their deepest burial depth, but the assumptions are a source of uncertainty in the modelling. – Spectral decomposition of the full stack reveals a very high density of channelized features in the Triassic at multiple levels, according to Laurent.
As for source rock(s), the petroleum system implies that while the Jurassic Hekkingen formation is immature, the Permian and Lower Triassic are both likely to be mature.
State of the art depth imaging workflow
Having a better idea of the main targets, their next step was to make full use of the large dual-sensor broadband 3D seismic dataset located over the Haapet Dome on the Bjarmeland Platform (Figure 1). Advanced imaging and interpretation workflows were developed to exploit the full potential of the broadband data and surmount imaging challenges due to the hard seabed.
– The solution used to de-risk shallow targets lies in a quantitative interpretation workflow integrating Separated Wavefield Imaging (SWIM) providing near angles with Full Waveform Inversion (FWI) to obtain the valuable low frequencies necessary to generate absolute elastic attributes in absence of well data, says Laurent.
– SWIM is an imaging technique that uses energy from sea-surface reflections to provide the near angle information for reliable Amplitude versus Angle (AVA) analysis. It uses both up-going and down-going wavefields by effectively creating virtual sources at every receiver location in a marine spread, explains Sören Naumann, Staff Geophysicist.
Using SWIM, the PGS team was able to produce images of the shallow reflectors where primary reflections alone would not have been sufficient. The geophysicist further explains that the minimum recorded angle range was extended down to 3 degrees using sea-surface reflections compared to 24 degrees for primary reflections.
A depth migration with compensation for the earth absorption using primaries was also generated with good near angle information coverage from 800 m below seabed.
High energy sands
This quantitative approach, using AVA attributes, made it possible to estimate the thickness of the Jurassic strata across the Haapet Dome (Figure 5.a – Box 1 on Figure 2). It was also possible to discriminate three different AVA responses at the top reservoir in the Jurassic and conformable with topography, which could potentially be related to various fluid fills (Figure 5.b & Figure 5.d).

– The sand reservoir seems to be quite continuous throughout the Haapet Dome area reaching 30 m thickness locally (Figure 5.a). Although destructive interference near the top reservoir, means it is likely that below 9 m the reservoir thickness is overestimated, says Laurent. But sand could still be present, he claims. Well results for Korpfjell confirmed the presence of 28 m of Jurassic sandstones.
The analysis also shows that the depositional environment in the Late Triassic to the Early Jurassic seems to be of a large scale and high energy.
– This is why we believe that we are probably dealing with an estuary or a coastal margin that could be associated with well sorted and clean sandstones. This is compatible with the rock physics model that suggests high-quality reservoirs with porosities in excess of 20% in the Jurassic and 12-15% in the Triassic, Rune Sakariassen, Senior Geoscientist concludes. He adds that some risk remains on these porosity values due to the remote location of the Haapet Dome from the wells used in the rock physics model. 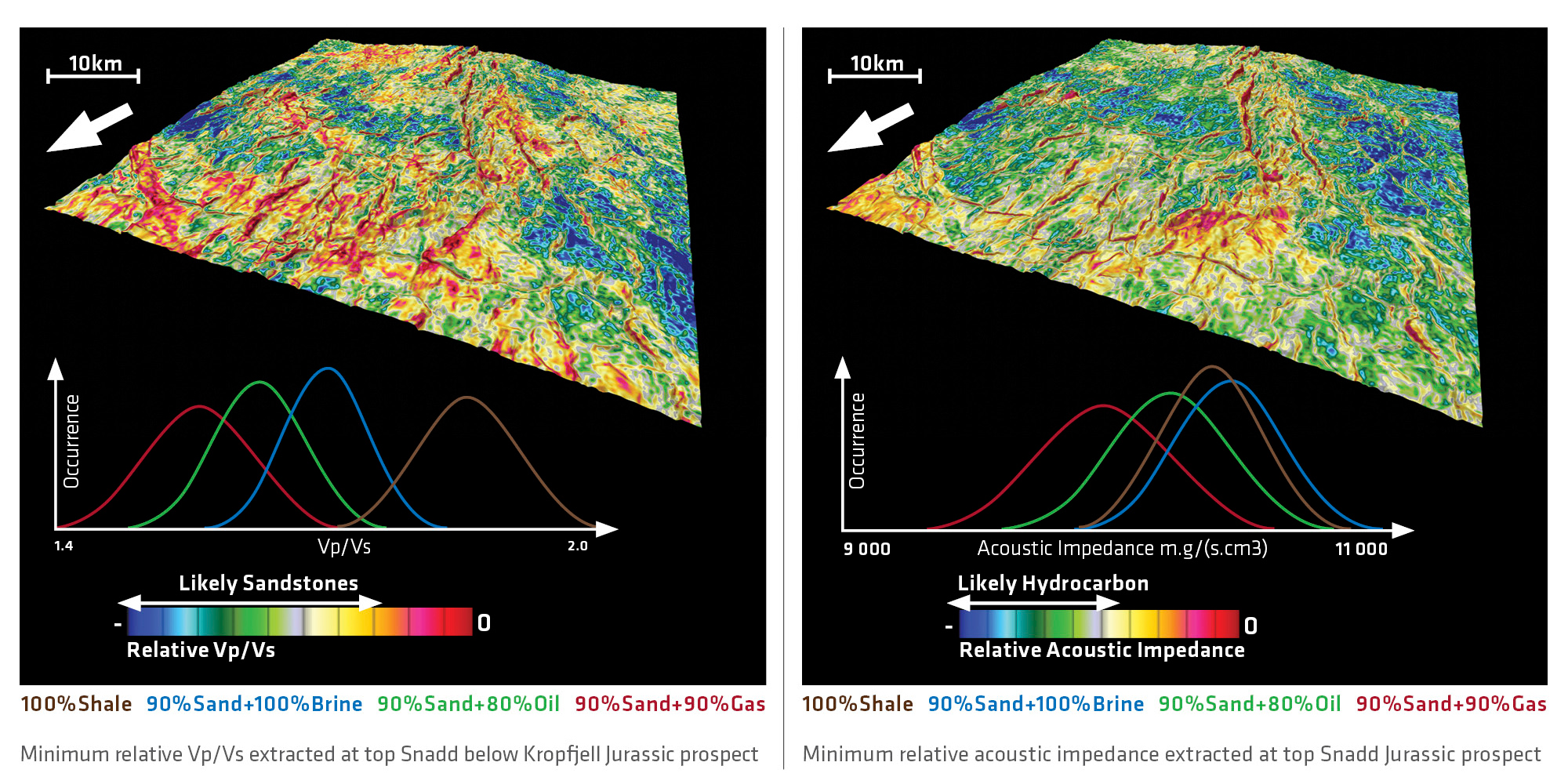 Further analysis of AVA attributes of the deeper Snadd on the Haapet Dome reveals channelized features (Figure 6 – Box 2 on Figure 2) similar to the Kobbe meandering channels in open acreage, with acoustic signature potentially related to hydrocarbon-filled reservoirs trapped against sealing faults (Figure 7 – Box 3 on Figure 2). The rock physics model suggests that low relative acoustic impedance indicates the presence of hydrocarbons, where a low velocity ratio (Vp/Vs) indicates the presence of sand (Figure 6 & Figure 7).
– These findings indicate prospectivity at multiple levels in the Haapet Dome as well as into open acreage further south toward the Veslekari Dome. The gas discovery in Korpfjell confirms the presence of a working petroleum system and further potential targets are present, concludes Laurent. 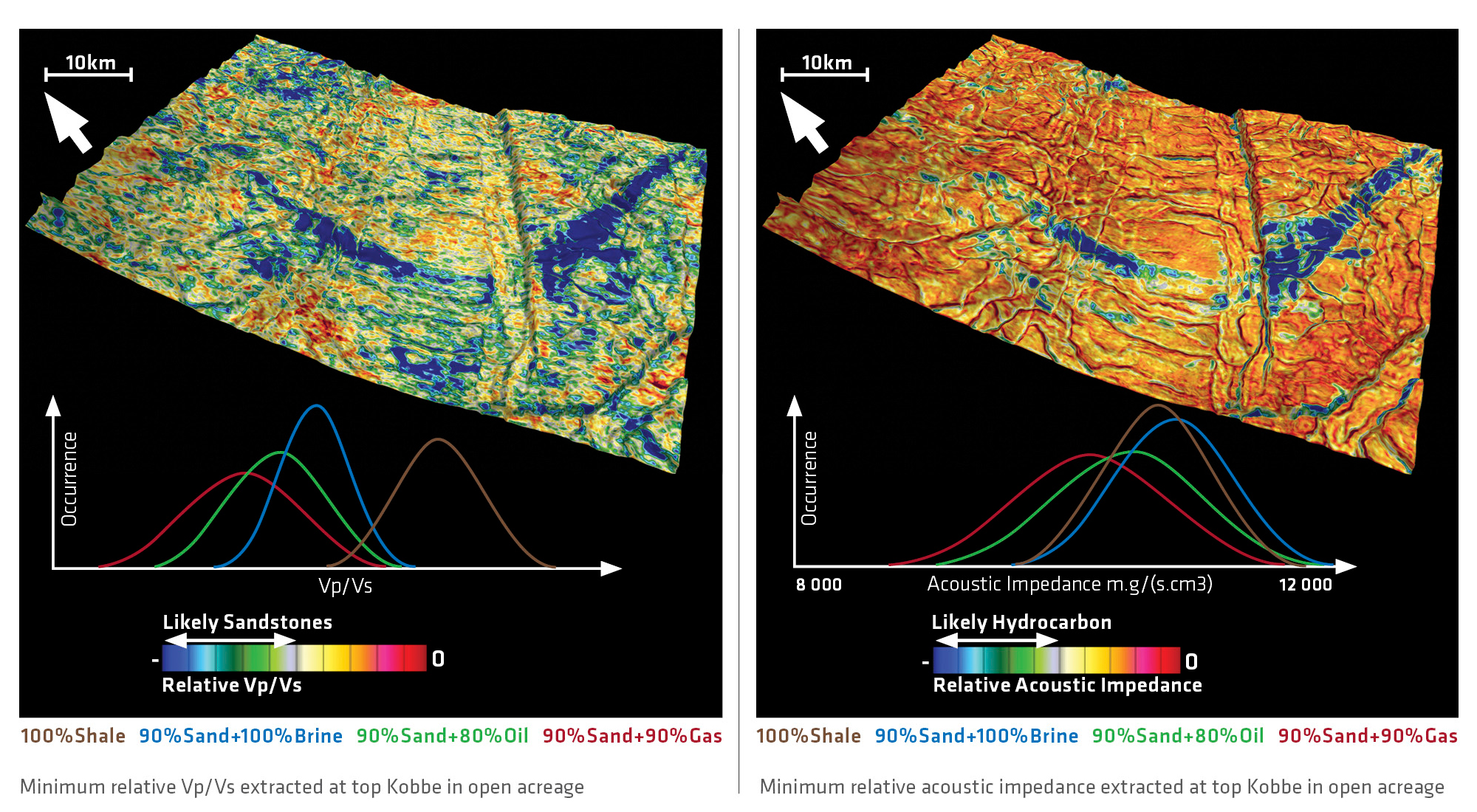 Bad news for the Jurassic …
Proper modern de-risking includes analysis of EM-data, and PGS seeks to offer Towed Streamer EM with all their seismic data in the Barents Sea.
While AVA-analyses may indicate hydrocarbon fluids, the EM data do not give a strong case for highly saturated oil or gas in the Jurassic sandstones (Figure 5.c).
– We do not see anomalous resistivity that may be associated with a highly saturated reservoir, says Allan McKay, EM Processing and Interpretation Manager in PGS. Subtle anomalies are apparent, but nothing like the well-known Wisting response.
PGS modelling shows that to achieve a significant EM-response the reservoir needs oil saturation of at least 60-70%. The weakness of the resistivity anomalies means an oil reservoir similar to the Wisting discovery is unlikely.
If the reservoir is filled with oil, the PGS EM-expert explains that the weakness of the anomaly may be caused by a shaly sandstone, an observation that could also be made from the seismic data.
– The EM response related to the Jurassic on the Korpfjell prospect makes it difficult to support an accumulation with good porosity sandstones, light oil and a large volume, Allan McKay concludes.
– On the contrary, three different AVA signatures would indicate the presence of more than one fluid in the reservoir (Figure 5.b). However, it’s impossible to say if any oil in the reservoir has been biodegraded, highlighted Laurent prior to the well results.
– The more encouraging news is that anomalies observed on the EM datasets suggest the presence of resistive bodies correlating to AVA anomalies potentially linked to presence of saturated hydrocarbons in the Triassic (Figure 7 – Box 3 on Figure 2), says McKay.
How to use these data?
The first wildcat in a true frontier province has now being drilled (7435/12-1 Korpfjell). Due to its shallow depth and lack of well control (the closest well is 250 km away), the de-risking of this prospect faced several challenges, as outlined above, and the same applies to numerous other shallow prospects in the Eastern Barents Sea.
A novel approach was therefore considered necessary by PGS in order to predict reservoir characteristics to evaluate shallow targets.
While analysis of seismic data is not (yet) capable of making firm conclusions, Korpfjell is a proof that combining several technologies can help in the de-risking.
– We believe our approach of imaging using separated wavefields (SWIM) has improved the shallow pre-stack seismic data considerably, enabling us to do quantitative interpretations. In addition, a combination of rock physics modelling, advanced seismic analysis and the use of EM-data has made possible to de-risk both reservoir properties and hydrocarbon fill in the most prospective sandstones across the Haapet Dome, concludes Erik Ewig.
Although no clear conclusion could be made, using all available geophysical data (FWI, SWIM, KPSDM and EM) has helped identify shallow Jurassic targets and highlighted the associated risks. Such methods also suggested smaller but less risky features down in the Triassic. The results from the Korpfjell drilling have clearly confirmed the presence of a working petroleum system in the area.
Further potential in large Permian carbonate structures could also play an important role in the area (Figure 8 – Box 4 on Figure 2).

Figur 8: Time horizon of Top Permian carbonate. Large build-ups can be observed throughout the area.
©PGS